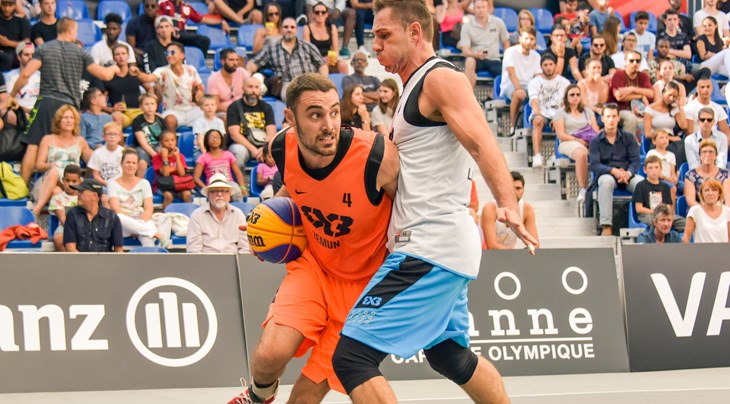 NANJING (FIBA 3x3 Challenger) - The month of April was one Bogdan Dragovic will never forget.

Despite entering the Nanjing Challenger in China as underdogs, Dragovic and Zemun (SRB) went undefeated, knocking out top-ranked teams Saskatoon (CAN) and Ljubljana (SRB) in the process to earn $10,000 USD and punch his team’s ticket to the FIBA 3x3 Utsonomiya Masters on 29-30 July. Zemun’s performance last month solidified the team as one of the sleeper teams of the FIBA 3x3 World Tour.

A week after Zemun’s huge weekend, our 3x3 expert Drew Ruiz spoke with Dragovic, the world’s No. 27-ranked player, about winning the Nanjing Challenger, flying to Japan, being able to compete with the top FIBA 3x3 teams, playing alongside MVP Nikola Vukovic and more.

What was the feeling like when Zemun was crowned champions at the Nanjing Challenger last month?

If we should choose one word to describe this feeling, it would definitely be incredible. To win first place in the tournament, where participation took the 5 from the 8 best teams, made this achievement even greater for us. Perfect organization, big support from the audience and magnificent victory ceremony, made us feel like stars in that moment, which is a feeling that we will never forget.

Did it motivate you more that the team came in as the No. 8 team in the FIBA 3x3 Federation Ranking?

To be the part of Top 8 teams in the world is the big satisfaction. That is additional motivation for us, which encouraged us to give our best on the court and justify our position. The fact that as the No. 8 team we have guaranteed participation at the Mexico City World Tour released us from the pressure and helps us to be 100 percent focused on the game and play our best 3x3.

In the Nanjing Challenger, Zemun defeated top teams like Saskatoon and Ljubljana. How much confidence does that give you knowing you guys can beat anyone?

The confidence is one of the most important characteristics in sports, and we are getting it with every victory. And when those victories came after defeating the best-ranked teams, the confidence grows even more.

How excited are you to head to Japan in July?

Like every time when my team participates at the World Tour, the excitement is on the highest level. If everything goes well, this will be the first World Tour where Team Zemun will take part with a full roster, which excites us additionally but also motivates us to train even harder and to show the audience in Japan that 3x3 deserves to take its place on the next Olympic games.

Are there any adjustments you plan on making in preparation for it?

Our goal is definitely to become the team that will constantly achieve good scores at the most famous tournaments. It takes a lot of effort to accomplish this goal and a lot of hard work to remove both physical and tactical shortcomings of my team, which we are trying to do on a daily basis. What I could say is that my team is making small steps. We don't talk much, but we are working a lot and we truly hope that the reward will come in the form of good result at the World Tour.

Zemun has had two experiences at the World Tour but has yet to make a final. What’s different about this year?

Except the experience that we gathered at our previous participation in the World Tour, the biggest difference is that in Japan my team will take part in its full body with Marko Dugosija on the roster. Also, in previous years, we had a lot of distractions, so we couldn't be completely focused on preparations for World Tour. This year, that won't be the case. We are fully focused and I hope that we will show our best game.

What do you think makes Zemun so special?

For us, 3x3 is not just a game; it's much more than that. We leave our heart on the court regardless of the score or the opponent in the match. I think that we are persistent and that every game we are starting with a lot of emotions, and that follows our fighting spirit, which, is in my opinion, our main characteristic. Also, except that we are teammates, we are also best friends, which motivates us additionally to help each other on the court in the best possible way.

There’s a video that’s been floating on the internet of Dusan Domovic Bulut recently hit a defender with the Shammgod and threw it in between the defender’s legs. What was your reaction to that?

Team Zemun often has trainings with team Novi Sad Al Wahda, and during them I became familiar with Bulut's capabilities, so this move didn't surprise me a lot. He is the best player in the world and [was the] most spectacular player at the World Tour, so with this move he justifies these epithets. I am very pleased that the No. 1 team is from my country, so we have the opportunity to learn from them.

How much of a better player has Nikola Vukovic been since his weight loss and getting back into great shape?

Nikola is a great player and it is very important for my team that he is on the court. He realized on time that 3x3 is a very hard and fast sport, so he put a lot of hard work to bring his body in the best possible shape. Comparing to two years ago, he lost 30 kg, which led him to be far better in both offensive and defensive play. Nikola is a professional and the greatest worker whom I know and that's why I was immensely happy that he won the MVP at the Nanjing Challenger. I hope that this will be an additional motive for him to continue in that way.