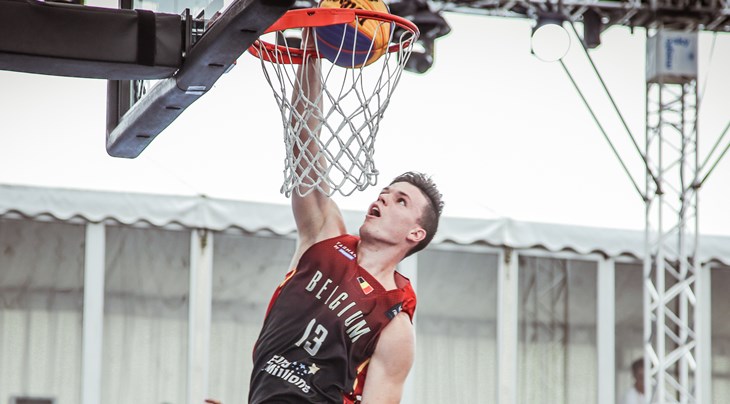 CHENGDU (FIBA 3x3 U18 World Cup 2017) – Belgium made quite an impression with a perfect 2-0 record and 2 noticeable appearances in the Daily Top 5 on Day 1 of the FIBA 3x3 U18 World Cup in Chengdu, China on June 28 2017. The Philippines' Miguel Gomez De Liano shined, especially in the Game of the Day against Israel. Here's our wrap-up.

Team of the Day: Belgium (men)

Belgium started with a bang in Chengdu by defeating Indonesia 18-11, with Vincent Peeters leading the team in scoring with 6. Against Jordan, the Cubs turned Lions (the official nickname of the Belgian senior basketball national team) and absolutely devoured the rim. Noah Fogang Tchendjou went baseline for a monster reverse dunk and Ayoub Nouhi started with a slick crossover before punching the one-handed jam.

The game lived up to the hype as both teams traded baskets early. 16-year-old Alon Druker gave Israel a big 3-point lead (14-11) as he clowned his defender with a sick ridiculous nutmeg. But the Philippines switched to 5th gear defensively and the Philippines' giant hope AJ Edu started swatting shots like flies. The Philippines went on a 7-1 run and held tight in the dying seconds to a 19-17 win. Day 1 top scorer Tamir Schiller (Israel) had 10 points in the game, including 4 shots from behind the arc. For the Philippines, a certain Miguel Gomez De Liano stood out...

Gomez De Liano is more than a fancy hairdo! The 17-year-old showcased a lightning quick first step and an ability to knock out shots in the Philippines' opener versus Israel. The 6ft 2in (1.88m) scored 9 points, including 3 shots from long range. He also led his team in scoring (4pts) in a close defensive-minded loss against the Netherlands. Gomez De Liano finished the day 3rd overall in scoring.