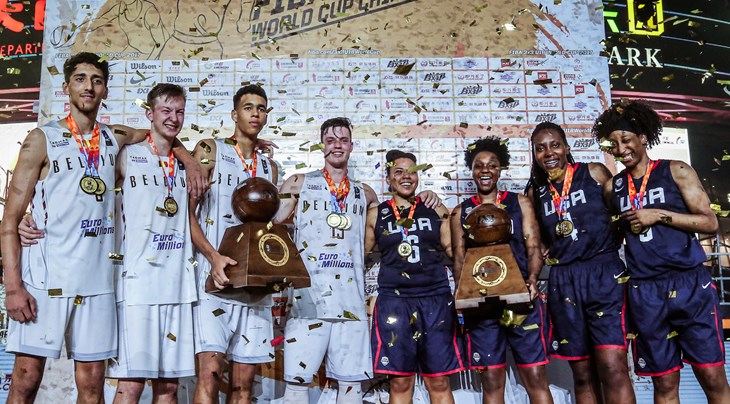 Just one year after an unexpected trip to the final of the FIBA 3x3 U18 Europe Cup, Belgium enjoyed a perfect 7-0 record and turned silver into gold in front of the massive Global Center, the largest building on the planet.

The athletic team made multiple appearances in the highlight reels and kept every team under 15 points.

In an all-Benelux final against the Netherlands, Noah Fogang Tchendjou topped all scorers with 6 points, including back-to-back daggers from outside the arc while the game was still undecided.

Tournament MVP Ayoub Nouhi added 5 points and fellow member of the Team of the Tournament Vincent Peeters contributed 4 points, including the play of the game: a slick crossover followed by a monster jam.

After winning 6 straight games, the lights turned to orange for the Netherlands in the final as sharpshooter Boyd Van der Vuurst De Vries was limited to just 5 points.

It was the second silver medal in two weeks for the Netherlands, following the Flying Dutchmen’s incredible run at the FIBA 3x3 World Cup.

Slovenia won bronze in a nail-biter against New Zealand (21-17). Just a few hours after hitting a game-winner in overtime against Ukraine in the quarter-finals, tournament top scorer Samo Gabersek did it again in the bronze-medal game, which earned him a spot on the Team of the Tournament.

In the women's category, USA ended a 4-year gold-winning drought by dominating Czech Republic (21-14) in the final.

Janelle Bailey was unstoppable in the middle in the title game, scoring a whopping 11 points that propelled her on top of the scoring charts.

Bailey was joined on the Team of the Tournament by team-mate and MVP Aquira DeCosta, who finished 4th overall in scoring and wowed the crowd with her signature shammgod.

Despite being limited to just 4 points in the final, Czech Republic’s Simona Ruzkova was also added to the Team of the Tournament.

Just like the Netherlands’ men, Czech Republic’s women enjoyed their best ever performance in the competition on the year the federation joined the FIBA 3x3 Fast Track, an ambitious 3x3 development program created by FIBA to identify and train the future 3x3 Olympians.

Nine more medals were handed out in the individual contests.

New FIBA 3x3 U18 World Champ Vincent Peeters (Belgium) did even better as he went double-gold after dominating the dunk contest, where the Philippines’ Florencio Serrano and Slovenia’s Matej Susec struck silver and bronze respectively.