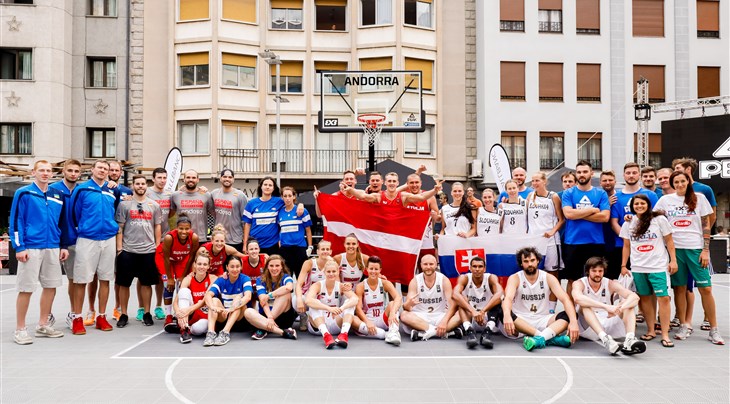 AMSTERDAM (FIBA 3x3 Europe Cup 2017) - Following the two qualifiers staged in Poitiers, France and Escaldes-Engordany, Andorra, 24 teams from 16 countries have qualified for the 3rd edition of the FIBA 3x3 Europe Cup, which will be staged in Amsterdam, Netherlands on July 7-9.

The reigning champs Hungary's women and Slovenia's men are back to defend their crown but the qualifiers couldn't have gone more differently for both teams.

While Hungary's women won the Andorra Qualifier after a perfect 7-0 record, Slovenia suffered 2 losses in Andorra and only qualified after edging out a young German in the loser's bracket. Worse: they lost Adin Kavgic due to injury. The big man is now questionable for the FIBA 3x3 Europe Cup.

The surprise in Escaldes-Engordany was Latvia's men who will make their first-ever appearance at the FIBA 3x3 Europe Cup, after winning the Andorra Qualifier.

The spectacular Nauris Miezis topped all scorers in qualifying and led Latvia to big wins over not one but two FIBA 3x3 World Cup quarter-finalists with Ukraine and Russia.

The other big surprise was the elimination of Ukraine's women in the France Qualifier. Ganna Zarytska's squad had won bronze at the FIBA 3x3 World Cup just 3 days earlier.

Speaking of the World Cup, both winners Serbia's men and Russia's women confirmed their domination by winning the France Qualifier.

The Dutch hosts were automatically qualified but the men's team still shined at the France Qualifier, finishing 4th overall.