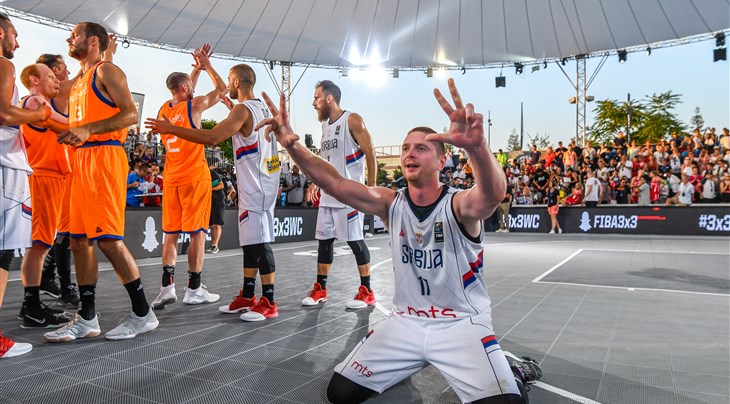 MIES (FIBA 3x3) - 2017 will forever be remembered as the year 3x3 made it from the streets to the Olympics. It will also go down in history as a year of crazy shots and unbelievable achievements.

The season started with a bang in April when 3x3 superstar Dusan Bulut broke the Internet with a sick ridiculous move at the Nanjing Challenger. Prize money topped half a million dollars in 2017 on the professional circuit, in big part thanks to the growth of the 14 challengers, these direct international qualifiers to the World Tour.

At the World Tour, Novi Sad Al Wahda became the 1st team to qualify to every single Masters: Saskatoon, Canada, Utsunomiya, Japan, Prague, Czech Republic, Lausanne, Switzerland, Debrecen, Hungary, Chengdu, China and Mexico City. They won 3 of them. The top 12 teams in the World Tour season standings made it to the epic Bloomage Beijing Final, where Novi Sad Al Wahda looked ready to win their 3rd crown until The Dragon Bodgan Dragovic from Zemun Master fired the most insane game-winner in 3x3 history.

Besides the professional season, the Netherlands had a year to remember in national team competitions. The men’s national team won silver at the World Cup and the women struck bronze at the Europe Cup, at home in Amsterdam in the biggest temporary outdoor venue in 3x3 history. Including youth categories, orange was the new black this year with 7 medals in total.

Serbia won the World Cup for the 3rd time in 4 editions with the men but were stunned by Latvia at the Europe Cup. Russia dominated the women category with the world and European title back to back.

Speaking of doubles, Belgium’s U18 men’s national team also completed the incredible World Cup – Europe Cup double. You wanna know what domination is? How about Slovenia’s men finishing undefeated in 20 games at the U23 Nations League? Hungary ruled the youth categories with the women with gold at the U23 Nations League and at the U18 Europe Cup. Only the US could stop them at the U18 World Cup.

The Asia Cup U18 and open categories were the ultimate proof that 3x3 gives a chance to new nations to shine. At the same time that China’s U18 men and Australia’s women struck gold, Indonesia’s U18 women and Mongolia’s men won their 1st-ever gold medal at a basketball tournament. 2017 also saw the 1st ever edition of the Africa Cup in Togo with Nigeria’s men and Mali’s women coming on top.

2017 was also the year our Facebook page reached 1 million likes and 3x3 topped 100 million views on all our video platforms. 3,000 videos and more than 400 hours of streaming and TV broadcast in more than 100 countries.

In 2017, 3x3 continued its meteoric rise and I can’t wait for 2018 for us to shatter all these pretty numbers.