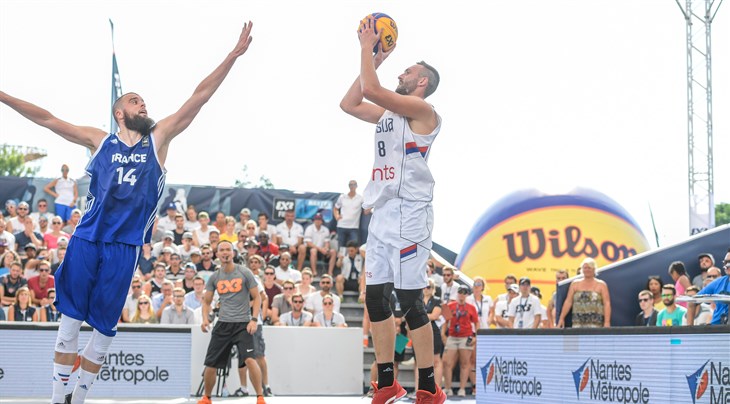 MIES (3x3) - 2017 was a special year for 3x3, with the game making it to the Olympic Games. Three years before Tokyo 2020, these 10 guys were the talk of the street this season. Check back on FIBA.basketball the next 2 days for the Top 10 Women and Top 10 Teams of the year.

A bittersweet symphony for Mr Bulutproof this year as he battled injuries, lost his #1 spot in the rankings (to teammate Dejan Majstorovic) and lost at the Europe Cup and the World Tour Final in dramatic fashion. But 2017 was also the year the Jake Gyllenhaal lookalike brought Serbia their 3rd World title in 4 editions and absolutely broke the internet with a patented "Bulut move", a sick ridiculous shammgod between the legs of his defender.

Our 'Dragon' did not take down the Wall, nor did he burn down an entire Tarly Army. He did better. Dragovic scored the most unbelievable game-winner in 3x3 history to give his team Zemun Master their first-ever win on the World Tour, at the World Tour Final no less.

With his perfect hair, Enkhbat put his country on the 3x3 map this season. Mongolia never won any medal in any international basketball tournament? Scratch that, the craftly 6ft 3in (1.90m) led Mongolia to gold at the FIBA 3x3 Asia Cup and took home the MVP trophy as well. The 25-year-old also made an impact on the professional circuit, leading the first-ever World Tour Mongolian team (Ulaanbaatar) all the way to the semi-finals of the Utsunomiya Masters in Japan.

The member of a very restricted club of 3 players who played in every edition of the World Tour seemed on the decline for the last few seasons. But with a new focus on the game, the man known as "The Sphinx" roared like a young lion on the 3x3 stage this season. Finzgar won his first Masters in 3 years and also led his team to silver at the FIBA 3x3 Europe Cup. He made a few memorable appearances in our Top 5s and quickly established as our favorite Instagram account.

'The Job' spearheaded a summer of unbelievable success for the Netherlands on the 3x3 scene (7 medals!). After winning bronze at the Europe Cup in 2016, the lefty led Holland to silver at the World Cup this season and made room for himself on the Team of the Tournament. You wouldn't believe it from how bad he behaved with our Schelde rims, but Jobse also distinguished himself for his work in the community both in the Netherlands and abroad with his 3x3 Unites foundation. Last but not least, he is one half of 3x3's most successful couple: his partner Sharon Beld won bronze at the FIBA 3x3 Europe this year.

Jurkovitz got so high on these alley-oops this season, we had no choice but to call him 'Swiss Khalifa'. On his first year playing high-level 3x3, the 22-year-old led the first-ever Swiss team to make it to the World Tour Final. He even took down the number one team in the world Novi Sad Al Wahda in the pool phase of the Lausanne Masters. Now that 3x3 is in the Olympics, the 6ft 6in (1.99m) leaper has his eyes set on Tokyo 2020 where he wants to imitate his father, who played volleyball at the 1988 Olympics in Seoul.

Like Jurkovitz, his dad is a former Olympian (rowing) and he rejuvenated the 3x3 scene with some serious highlights this season. But what the number one U23 player in the world did this year on top of this is win titles already. Lamanis hit one of the biggest shots of the season, which knocked out super favorites Serbia and led Latvia to an unexpected gold medal at the FIBA 3x3 Europe Cup. He also made strides on the professional circuit with his team Riga (and the equally impressive Nauris Miezis), who won 3 Challengers, and reached the semi-finals in 3 World Tour Masters and at the World Tour Final. Not bad for a player who was still competing at the U18 World Cup back in 2012 and grew up watching Bulut and Finzgar on YouTube.

2017 was the year 'The Maestro' left Dusan Bulut's shadow. The sharpshooter was by far the best player at the FIBA 3x3 World Cup and he stepped up when 'Mr Bullutproof' had to miss time due to injury. Granted his Top 10 would not break the Internet but his outside shot, his backdoor cuts and his absurd feel for the game would break any defense on the professional circuit. Majstorovic became the number 1 player in the world in September and at the level he's playing right now, it looks like he's here to stay.

With his teammate Ayoub Nouhi, the athletic Vincent Peeters swept the U18 circuit this summer with gold medals at the World Cup and the Europe Cup. He even went triple gold after winning the dunk contest at the U18 World Cup, with dunks more ferocious than a Kevin De Bruyne strike. Belgium's got a very bright future: Peeters will be 21 at the Tokyo 2020 Olympic Games...

A few years after outplaying a young Steph Curry at the FIBA U19 World (Basketball) Championship, Stojacic thought he was done with the game. After discovering 3x3 by chance last year, the 28-year-old Serb went all in this season, led his team to 2 Masters titles and was named MVP of the World Tour regular season. Stojacic can shoot the lights out but it's his ability to break ankles that converted a lot of new fans this season.