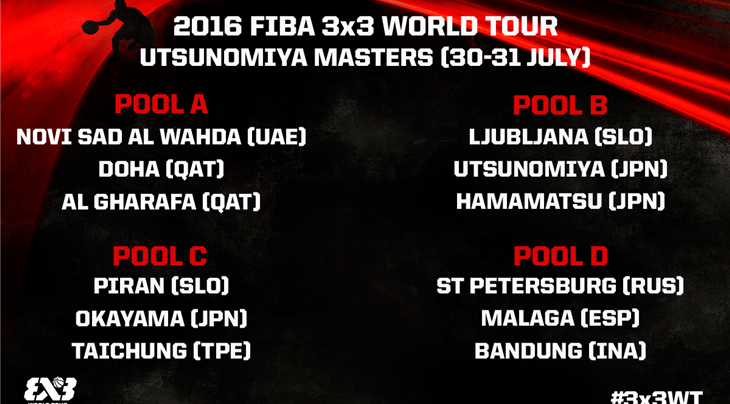 Pool A will be the talk of the tournament after the automatic seeding put the reigning champs together with last year's Beijing Masters winners Team Doha and a new Qatari team named Al Gharafa.

Novi Sad Al Wahda and Doha crossed paths twice last year at the World Tour. The former won in Manila while the latter won the rematch in Beijing. This said, Team Doha will show a much different face in Japan, with big man Tanguy Ngombo the only player remaining from last season.

Just to add up some spice, one of the players who was not reconducted on Team Doha's roster - Sammy Monroe - will play for an ambitious Al Gharafa team, that features three US players.

Like it is the case in all FIBA 3x3 competitions, the seeding is conducted automatically according to the 3x3 individual World ranking (of the three best players from each team).  According to the FIBA 3x3 regulations, teams are seeded as follows:

3x3 Japanese star Tomoya Ochiai aka 'Worm' made history by becoming one of the 8 players to participate in each edition of the World Tour (the other ones are Denver's Corey Campbell and Derek Griffin, Malaga's Javier Meras Ramirez, Ismael Sanchez Reina and Juan Vasco Trabado and Piran's Adin Kavgic and Simon Finzgar). He will be the main attraction in Pool B, which features two Japanese teams: Ochiai's Utsunomiya and Hamamatsu.

Hamamatsu will be represented by Indian players based in Japan, including Indian basketball star Amjyot Singh, who finished top scorer at the 2015 FIBA Asia Championship ahead of former NBA players Andray Blatche and Yi Jianlian.

Oh and none other than the 2013 FIBA 3x3 World Tour winners Ljubljana (SLO) will be the top seed in Pool B.

Piran (SLO) will be the heavy favourites in Pool C after they finished 4th last year at the World Tour Final. They will face the third and last Japanese team at the event (Team Okayama) and Taichung from Chinese Taipei.

Pool D will be the only pool with two European teams. The talented Alexandr Pavlov will lead St Petersburg (RUS) while the best passing big man on the 3x3 scene Juan Vasco Trabado will star for Malaga (ESP). A young Bandung team from Indonesia will complete the pool.

For those not attending the games on the large square fronting the Futaarayama Jinja shrine, pool games will start at 15.55 local time (GMT+9) on Saturday live on FIBA 3x3's official YouTube channel. The top-two placed teams from each pool advance to a standard knock-out round which starts at the quarter-finals stage, from 16.20 local time on Sunday.