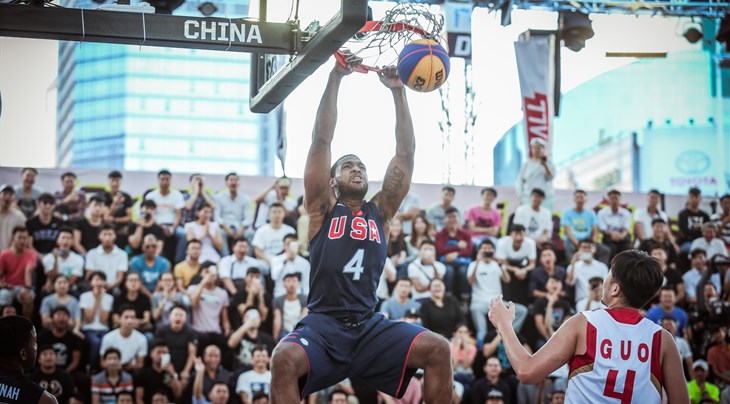 23 year-old Myke Henry led his team to back-to-back wins before the limit on Thursday (21-12 against Japan and 21-15 against China). The former DePaul standout had a team-high 17 while Alfonzo McKinnie had 8… including 6 dunks! The US team became a crowd favourite but is up for a difficult match-up in the quarter-finals against reigning World Champs Qatar.

Game of the Day: USA 16 – Spain 21 (women) Spain wrote history on Thursday by becoming the first-ever squad to beat the US women’s national team at the 3x3 World Championships. The 1.91m Aitana Mediavilla and sharpshooter Paula Palomares scored 9 points apiece in a do-or-die game for Spain, who had lost against Italy on the opening day. The USA now stand 21-1 in 3x3 World Championships history.

2011 NBA draft pick Tanguy Ngombo carried the reigning champs to the quarter-finals with a mixture of big-boy drives to the basket and sweet touch from the outside. He had 9 points against Russia and 10 including 4 two-pointers against New Zealand. He also had a pair of blocks that could be heard all the way to Hong Kong.

Simply speaking the greatest individual performance of the tournament so far. We already covered Mediavilla’s 9-point performance against USA. The 30-year-old did had a post-move showcase in the game against Japan: she scored twice more than the entire Japanese team and contributed 16 to Spain’s 18 points. Total domination.

Day 4: 2.10-10.00pm on youtube.com/FIBA3x3 with the return of the impressive French’s women and Slovenia’s men teams.