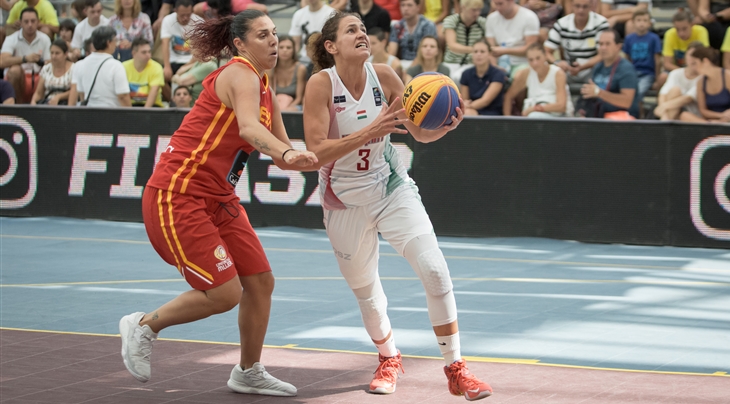 Tallest, oldest player of the tournament: the French star will collect all superlatives in China. But though she was born in the 70’s doesn’t mean she won’t go up to block those weak lay-up attempts off the glass.

The Auckland native brought New Zealand to second place last year at the FIBA 3x3 Oceania Championships. After a busy summer representing the country at the Olympic Qualifying Tournament in France, Franklin has taken the next step. The kind of step when you don't lose against eternal rivals Australia any more?

The Chicago native returns to 3x3 five years after leading the US to the semi-finals of the first-ever FIBA 3x3 U18 World Championships. For sure there will be a great deal of pressure on 'Nae Nae'’s shoulders considering the USA women’s national team has a perfect 18-0 record at the 3x3 (senior) World Championships.

After embarrassing a long list of teenagers, the MVP of the U18 European Championships takes on the biggest names in 3x3 basketball. We’ll stop with the Katniss Everdeen... some other time. The Instagram sensation can shoot the ball all the way from District 12.

At just 25, Perez is the only woman who has played in all 3 editions of the World Championships. Next step: finally leading Argentina to the quarter-finals.

The only illegal thing about that Screen is the number of lines on her resume. Jenni Screen is the only player in Guangzhou with 2 Olympic medals (silver in 2008 and bronze in 2012). If she was to lead Australia to gold in China, she’d become the first-ever player to become World Champion both in basketball and 3x3.

Unlike a lot of players on this list, the Bucharest native has been playing 3x3 for over 10 years. Last month, the do-it-all Sipos helped Romania win an amazing silver medal at the 3x3 European Championships in front of their home crowd.

The new number 1 player in the world has been the perfect finisher around the rim for a Sheldon Cooper smart Hungarian team, that dominated the European Championships.

The former number 1 player in the world lost her due after a disappointing European Championships. But she has a card down her sleeve: Italy will be the only women’s team featuring the exact same 4 players in Guangzhou (as in Bucharest).

The super-skilled Zarytska led Ukraine to an unexpected silver medal at the 2015 European Games. And though it was probably a travel, her overtime game-winner against Italy was probably the shot of the tournament at the European Championships last month.