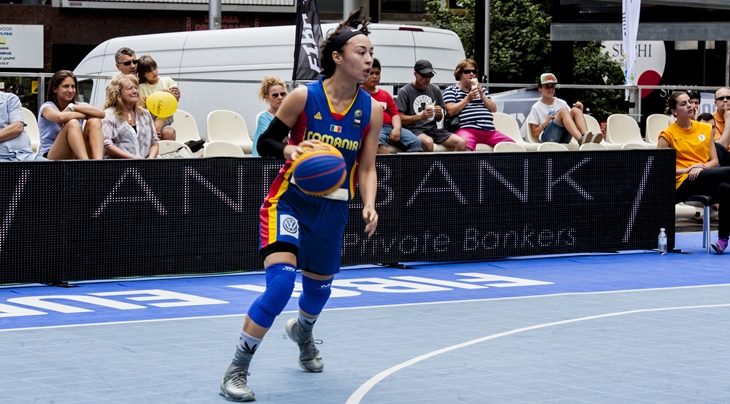 Shortest player on the court, biggest heart in the tournament: you are going to love her no-look passes and absolutely mental celebrations

Switzerland may not have the biggest basketball tradition in Europe but Giroud put the country on the 3x3 map the last couple of years. Switzerland have reached the quarter-finals of the 2014 World Championships, 2014 European Championships and 2015 European Games. She ranked third in scoring in the qualifiers.

The 29 year-old has been the most successful Russian 3x3 player with 2 gold and 1 silver medals in the last two years. She can shoot and is without a doubt the best defender on the 3x3 scene.

For the first edition of the European Championships - also staged in Romania - Marginean caught fire and finished top scorer of the tournament. We'd be surprised if the former WNBA player did not please her local fans once again.

Top scorer at the European Games last year, top scorer in the European Championships Qualifiers this year, Maznichenko is a scoring machine in the post. If you don't believe how hungry she is to win gold in Romania, just check her out on Instagram.

Hungary got our attention by winning the Andorra Qualifier. Medgyessy was a big reason why with her no-look passes and fancy footwork.

The half-Romanian, half-Korean Sonia Ursu has brought her speed and creative dribbling to the 3x3 scene. Romania won the 3x3 European Championships in 2014 in the men's category. What if after the men, it was the women's turn to shine on the European scene?

The Russian star earned everybody's respect by winning the European Games on the same year she gave birth to a little boy.

The number one 3x3 player in the world comes from Italy (and wears shorts shorter than John Stockton). The mental leader of the team helped Italy beat France, Russia and Spain at the France Qualifier, three of the best nations in basketball.

First they were dominating men's 3x3 and now they're taking over the women's categories. Serbia will be one of the main contenders in Bucharest thanks to Jovana Vukoje, who has the quickest first step in the game. And the fanciest haircut too.