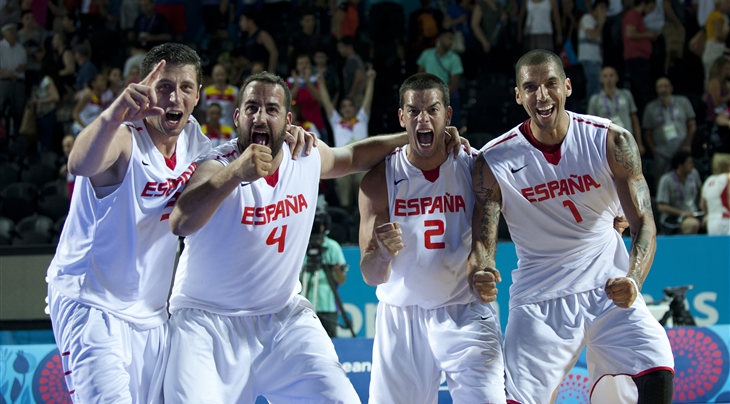 1.    STAR PLAYER: The spectacular Nacho Martin has represented Spain internationally in basketball in the past and now he’s bringing the 3x3 national team to new heights. He was a highlight machine at the 2015 European Games, where he led Spain to an unexpected silver medal.

2.    FAVOURITES: The two Slovenian teams (men and women) struck silver in the first edition of the FIBA 3x3 European Championships two years ago. Three players are back on the women’s team. Masa Pirsic is not on the team? No problem: her sister Sandra brings her 194 centimetres to the rescue. The men’s team is completely new but stars the four players who reached the semi-finals of 3x3’s professional circuit - the FIBA 3x3 World Tour - last year (Team Piran, ex-Trbovlje).

3.    NEW BLOOD: Keep an eye on 19-year-olds Jordan Blount, who shined for Ireland in youth categories and Anja Fuchs-Robetin, who impressed for Austria’s women.

4.    FIRST TIME: Speaking of Austria, the event will mark the first-time ever the country registers a national team at a FIBA 3x3 event!

5.    ONE-ON-ONE: Keep an eye on Georgian star Vakhtang Kadaria, who won the Red Bull King of the Rock one-on-one competition three times in a row in his country.

6.    BROTHERS: Belarus comes with a team of giants with all players over 2m and two of them are familiar faces with former college stars Yegor Mescheriakov (39) and his brother Nikita (28) teaming up for once in a long long time.

7.    HOSTS: Andorra have been a regular at the European and even World Championships and Patricia Vicente even finished last year as the #1 3x3 women’s player in the world. The entire country is expected to come support the two national teams. Enough to help them book their ticket to Bucharest?

8. SCORING CHAMP: Speaking of Bucharest, Gabriela Marginean was on fire two years ago when the first edition of the competition was held in the Romanian capital. The former WNBA player led all scorers there and is coming for more than a scoring title this time around.

9.    SURPRISE SURPRISE: Ireland had a Cinderella run at the European Games last year, reaching the quarter-finals after a resounding upset of Czech Republic. The talented Orla O'Reilly is back and the team brought new pieces to do greater things in 2016.

10.    VIDEOS: Every single game will be livestreamed on youtube.com/FIBA3x3 and on facebook.com/FIBA3x3. No Kyle Montgomery this time but we will also get you a Top 5 of the event, mixtapes of the top players and highlights of the finals. You are going to enjoy this weekend.