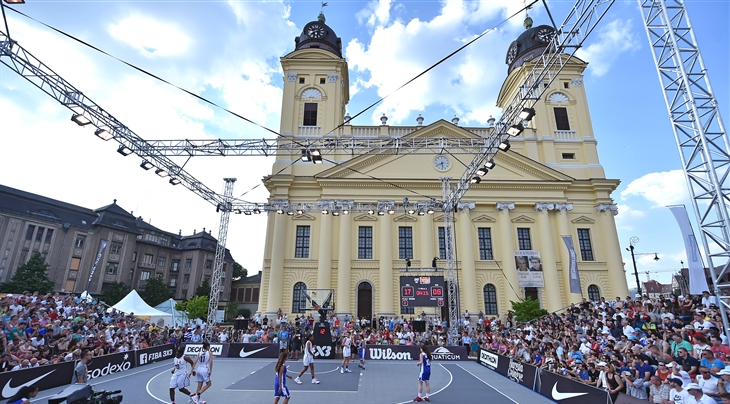 DEBRECEN (2016 FIBA 3x3 World Tour) - The 5th Masters of the season comes to Hungary and we give you the top 10 reasons to follow the Debrecen Masters on FIBA 3x3's official YouTube channel.

1. ROAD TO ABU DHABI - Novi Sad Al Wahda (UAE) and Ljubljana (SLO) have already secured their ticket to the World Tour Final but for the others, Debrecen may be the last chance to go to Abu Dhabi. Three teams will start with an advantage (Kranj (SLO), Budapest (HUN) and Belgrade (SRB)) since they have already earned points in Lausanne and Prague in the World Tour standings.

2. NUMBER ONE - Debrecen fans got a chance to see Dusan Domovic Bulut last year when he came as a guest star during the FIBA 3x3 U18 World Championships. This time, they get to see him on the court with his Novi Sad Al Wahda team.

3. LIFE AFTER BUCHAREST - Things didn't go as planned for every team at the FIBA 3x3 European Championships in Romania last weekend. Serbia seeked gold and got silver, the Netherlands earned an unprecedented bronze medal and Ukraine did not go past the pool phase. Different dynamics but same players at the Debrecen Masters. The four Serbian players will compete under the name Novi Sad Al Wahda, three Dutch players feature on Team Amsterdam and one Ukrainian player will play for Team Dnipro.

4. JOEY SCHELVIS - Speaking of Bucharest, 27-year-old Joey Schelvis proved he had the best arm in Europe after winning gold in the Shoot-Out Contest.

5. SAMBA - Team São Paulo DC will make history in Debrecen by becoming the first-ever South American team to compete in a European stage of the FIBA 3x3 World Tour. The athletic Leandro Lima can get up there and we expect him to contribute to the Top 5 of the tournament.

6. DON'T CALL IT A COMEBACK - Back in 2012, Split (CRO) were just 1 game away from winning the first-ever edition of the World Tour. After a one-year absence, they're back at the World Tour to turn back the clock.

7. GRADUATION PARTY - Last year, Team Bordeaux reached the final of the FISU 3x3 World University League. This year, they're competing with the grown-ups. They're young, they're athletic and their playmaker is nicknamed 'Magic'. Should be fun to watch.

8. I THINK THEREFORE I JAM - Maybe for the first time this year, we will have three high-level athletes at the Dunk Contest. Dmitry 'Smoove' Krivenko (UKR) is maybe the most creative dunker of all time, while Kristaps Dargais (LAT) hammers it down like Thor. Don't sleep on Arek Przybylski (POL) who is the most improved dunker in the business.

9. DEBR3X3N - The second largest city in Hungary showed its love for 3x3 last year by hosting an incredibly success FIBA 3x3 U18 World Championships. We have had beautiful venues at the World Tour but the view on the Great Reform Church on Kossuth Square is truly unique.