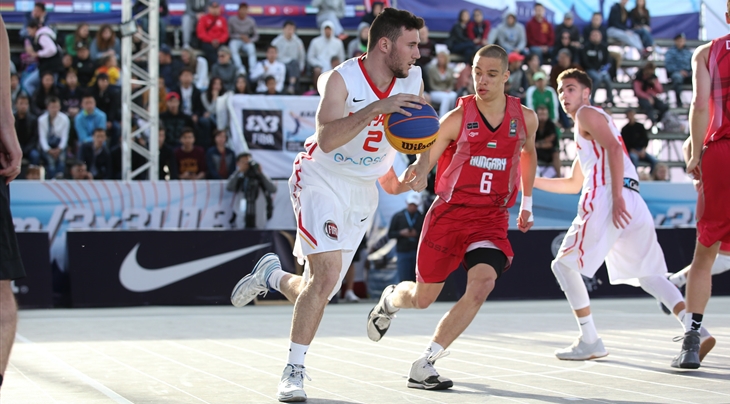 REIGNING CHAMPS: Turkey stunned all the favourites last year to win the first-ever edition of the 3x3 U18 European Championships in the men’s category. Three of the four reigning champs are back this year, including the gritty Tanalp Sengun, who led all scorers last year and Türkay Barutçuoğlu.

SERIOUS DUNKERS: Germany’s Noah Kamdem is back after winning bronze in last year’s U18 European Championships Dunk Contest. But there’s more: you may remember Urban Oman had some rim-wreckers at the U18 World Championships this year. Last but not least, Alberto Perez is back after winning silver in the dunk contest of Astana and delivering the biggest poster dunk of the entire tournament.

RISING STAR: Evita Herminjard caught our eye last year in Debrecen when she led Switzerland to a near-upset of the US. She can do it all on the offensive end and is a poison in defense. We wouldn’t be surprised if she made her 2nd trip to Debrecen in 2 years.

RETURN OF SERBIA?: We haven’t seen a Serbia U18 team on the 3x3 scene since the country beat the US in overtime in the men’s final of the 2012 U18 World Championships. This could be the year the country return to their winning ways: all four players come from the prestigious basketball academy of Partizan Belgrade.

5 FOOT ASSASSIN: You won’t find a player shorter than Seraphina Asuamah-Kofoh in Riga. At 1.60m, the German playmaker with Ghanaian origins won’t break rims. But ankles we can’t say for sure…

DROP IT LIKE IT’S HOT: Raise your hand if you thought the Former Yougoslav Republic of Macedonia (MKD) would make it to the U18 European Championships last year. That’s what we thought! The versatile Elvis Hot was a big reason why MKD won the Amsterdam Qualifier last year and finished 13th overall.

OUTSIDERS: Keep an eye on Slovenia’s men, who impressed at the U18 World Championships last month before collapsing in the quarter-finals and finishing 7th. We spoke about Urban Oman’s vertical but don’t sleep on the strong Matic Siska.

BETTER THAN BRONZE: Naira Caceres had maybe the biggest shot of the U18 World Championships this year, a corner 2 with Spain down by 1 with a few seconds left in the quarter-finals against Hungary. After a close-fought loss against the eventual champs France, the team bounced back to win bronze. Two players have gone but Caceres and the mighty Paulo Ginzo are back. Plus, they get a little help from the very promising Sofia Galéron.

LATVIAN HOSTS: Last year at the U18 European Championships, Latvia’s men took a good 9th place. Big man Roberts Dembskis has 205 reasons (and centimetres) to think the team can qualify again in front of their home crowd.

10. VIDEOS: All games played on the main court will be livestreamed on youtube.com/FIBA3x3. No Kyle Montgomery on duty for the FIBA 3x3 World Tour Mexico City Masters, but we will also get you a Top 5 of the event, mixtapes of the top players and highlights of the finals. You are going to enjoy this weekend.