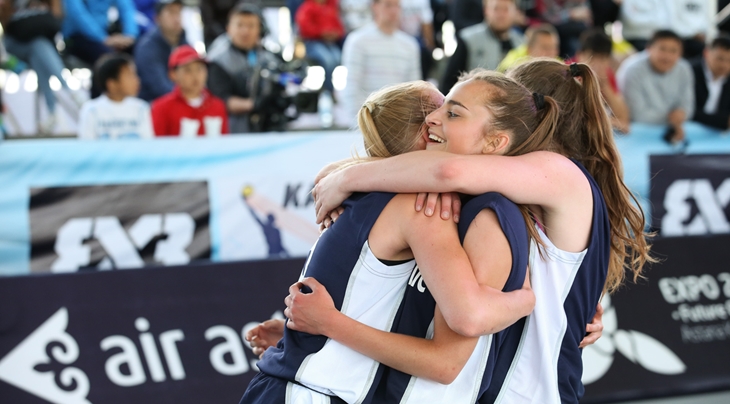 1. HIGHLIGHT FACTORY: Reminiscent of a certain Jason ‘White Chocolate’ Williams, Dato Apxazava turned heads and ankles in June at the U18 World Championships. He even led Georgia to a historic quarter-finals appearance. We can’t guarantee Georgia will make the Top 10 in Hungary but we can bet Dato will crash the Top 10 Plays of the Tournament video.

2. HOSTS: Thanks to a cold-blooded game-winner courtesy of Nina Aho, Hungary won gold last year at the U18 European Championships. The men’s team showed flashes of brilliance at the U18 World Championships in June and Krisztofer Durazi proved he could throw it down with authority.

3. SURPRISE TEAM: Andorra have become regulars in 3x3 competitions. With probably the best generation in their history, the men’s team had the biggest upset of the U18 World Championships this spring with a win against China. Who’s next?

4. CAN’T TEACH HEIGHT: Ireland have big ambitions in 3x3, just as big as 2.08m big man Liam Chandler, who will be the highest peak of the tournament.

5. FANTASTIC FOUR: All four semi-finalists in the women’s category at last year’s U18 European Championships have been seeded in the same qualifier. Last year, Hungary beat Belarus for gold and Israel beat France for bronze. But tables have turned this year and France arrive in Szolnok as reigning U18 World Champs…

6. ASTOU GAYE: The 1.87m French captain delivered a unique MVP performance in Astana last month, topping all scorers with post domination and a special ability to hit the outside shot. We wouldn’t be surprised if her bigger sister Aby – a regular for France’s senior national basketball team – is now just referred to as Astou’s sister.

7. SARA KRUMPHOLCOVA: The Czech sharpshooter made headlines in Astana by scoring 17 points in a game (finishing 21-5), leading Czech Republic to the semi-finals, making the Team of the Tournament and leading all players (men and women) in selfies taken with local Kazakh fans.

8. NEWCOMERS: New countries keep coming to 3x3 and Austria will make their U18 European Championships in the women’s category. Just three weeks ago, the senior women’s team clinched their ticket to the 3x3 European Championships for their first-ever participation in a FIBA 3x3 official competition. Can the U18 team follow in their footsteps?

9. CROSSOVER SPECIALIST: We expect Dutch playmaker Tijme Van Dijk to give Dato a hand to fill up the Top 5 Plays of the Day. The 1.81m put too many people on skates in Astana and also kept his team-mates happy with on point alley-oop passes.

10. VIDEOS: All games played on the main court will be livestreamed on youtube.com/FIBA3x3. No Kyle Montgomery on duty for the FIBA 3x3 World Tour Mexico City Masters, but we will also get you a Top 5 of the event, mixtapes of the top players and highlights of the finals. You are going to enjoy this weekend.