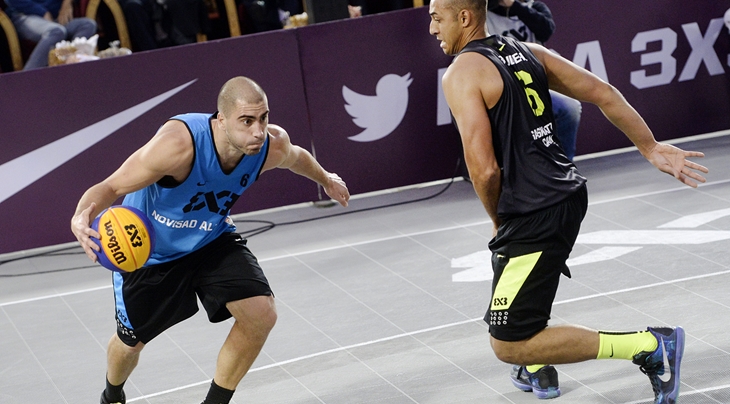 1. Last chance: We’ll start with some bad news: this is the last FIBA 3x3 event of the year! So make sure you tune in tomorrow: you may not see your favourite MrBullutproof, Iceman and Sultan of Swat before the first challengers in May.

2. Rivalries: It’s rivalry o’clock from the quarter-finals. Novi Sad Al Wahda (UAE) have been bullying Filipino teams for years. Can Team Manila put an end to that in Doha? It’s round 3 for NY Harlem NBA (USA) and Saskatoon (CAN) and the Canadians have yet to get the first W. These will be more than a game.

3. History Repeating: Since the FIBA 3x3 All Stars was created 3 years ago, the FIBA 3x3 World Tour winners ALWAYS made the double in Doha. It started with Ljubljana (SLO) in 2013 and continued with Novi Sad Al Wahda (UAE) the last two years. We bet Team Ljubljana like that stat, following their impressive World Tour Final win in Abu Dhabi 3 weeks ago.

4. MSP: Fans voted Dusan Domovic Bulut the most spectacular player of the World Tour season this week. That’s nice but can the number one 3x3 player in the World bring back his Novi Sad Al Wahda team back on top of the 3x3 World?


5. Poster Dunks: We need Rey Guevarra (Manila) can throw it down. ‘Maple Lief’ Lieffers (Saskatoon) can bang a rim or two. But Bright Akhuetie has height and dynamite. Just in case you don’t remember, this is what he did to the number one 3x3 U18 player in the World last year.


6. Make Shoot-Out Great Again: We have some of the best snipers in the game in Doha and we decided to challenge them a little. You win the Shoot-Out Contest, we give you 1,000$. You beat the all-time 15-point record from Mo Riddick? We double the money.


7. NBA Team: You heard it here: NBA Commissioner Adam Silver loves the 3x3 game. The NBA launched the Dew NBA3X tour this summer, got the legend Gary Payton as ambassador and had some of the most competitive teams ever. NY Harlem NBA won’t just represent New York in Qatar, they’ll have the whole NBA brand on their back.


8. Doha’s time?: Team Doha did it all. They won a World Tour Masters last year in Beijing. Their star player Erfan Ali Saeed won gold for Qatar at the 2014 FIBA 3x3 World Championships in Moscow. But in 3 editions, the local favourites did not manage to win at home. Former NBA draft pick Tanguy Ngombo is on the case.

9. The Voice: Admit it, you’ll miss him over winter. Fast like Kyle Lowry, precise like Kyle Korver and smooth like Selina Kyle, the voice of 3x3 Kyle Montgomery will be on the mic for the last time in 2016. A must-watch.

10. MORE! Top 5, star profiles, mixtapes. Make sure to do what close to 60,000 people did before you: subscribe to our YouTube channel so you don't miss a beat!