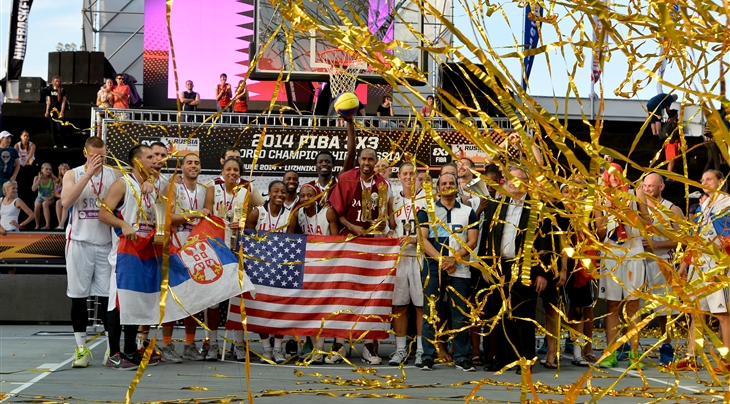 1. REIGNING CHAMPS: At the 2014 World Championships, Qatar shocked the world and USA Women continued their 3x3 domination. Two years later? Just one Qatari player (Erfan) is back from these two teams. Will the new blood lead the titleholders to more gold?

2. EUROPEAN CHAMPS: It was just a month ago that Slovenia’s men and Hungary’s women went undefeated in Bucharest to win their first European title. In this case, 7 out of 8 players are back. Can they make a historic double?


3. POOL A LIKE AMAZING: Like Italy and New Zealand weren’t already enough, the men’s Pool A in Guangzhou is probably the craziest pool in the history of 3x3: all three medallists from the latest edition in the same pool! Qatar, Serbia and Russia as appetizer with just 2 tickets to the quarter-finals! Amazing!

4. FIRST-TIME FOR USA: In two editions, the US men’s national team failed to win a medal at the World Championships. But this year, the team comes with a lot of hype with a clean 22-0 record since their 3x3 debut this summer...

5. OLYMPIANS: FIBA made an official request to the International Olympic Committee to add the game to the programme of the Tokyo Olympics. But for Michael Uhrova (Czech Republic) and Jenni Screen (Australia), it wouldn’t be a first time. Both competed twice in the basketball tournament of the Olympics before and Screen even won two Olympic medals (silver and bronze).

6. NEW GENERATION: Two former MVPs of the U18 European Championships will make their grand debut in the senior ranks. The future is now for Czech Republic's women with the top player of the 2016 edition Sara Krumpholcova and for Turkey’s men with 2015 MVP Tanalp Sengün.


7. RUMBLE IN THE URBAN JUNGLE: 3x3 is all about playing in iconic urban locations and this Guangzhou skyline is the most beautiful thing in the world not named Margot Robbie.

8. DUNK CONTEST: For the first time ever, FIBA opened the FIBA 3x3 World Championships Dunk Contests to professional dunkers. Expect Dmitry 'Smoove' Krivenko (Ukraine) to get the local Chinese crowd to its feet once he nails his ‘Win’ Dunk.


9. COMMENTATOR OF THE DECADE: He speaks 5 languages and sings in a 6-octave range. Ok no he doesn’t but he’s revolutionizing the world of play-by-play. Have no fear, Kyle Montgomery’s in your ear.

10. MORE!: Dunk highlights, Top 5, mixtapes. Make sure to subscribe to our YouTube channel so you don't miss a beat!