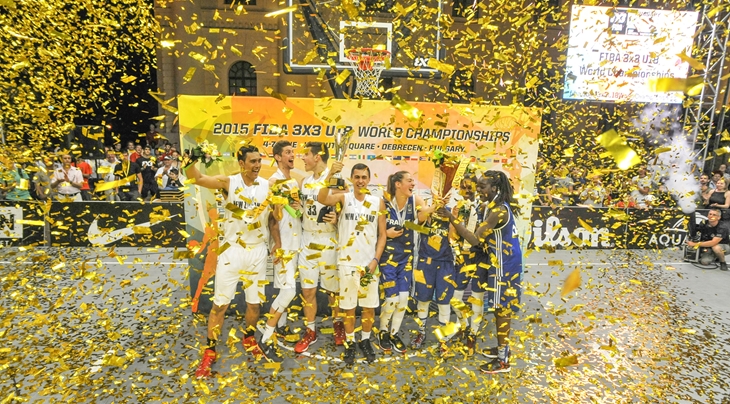 1. Gold medallist, MVP: Tai Wynyard took home everything last year in Debrecen. The lumberjack is back with added range and athleticism after spending six months with the legendary John Calipari at Kentucky. This could get ugly for the other 19 teams. Learn more about the Top 10 men to watch in Astana.

2. Argentina sent some of their biggest talents to the competition in recent years, with Gabriel Deck leading the team to gold in 2013 and Martin Fernandez finishing top scorer and striking silver in 2015. Just like Deck, big man Lautaro Berra looks up to his idol Luis Scola. The tallest player of the tournament could be one the next player to feature on our Top 10 of FIBA 3x3 U18 World Championships alumni.

3. After winning the two previous editions back-to-back, USA were upset by France in the dying moments of the women's tournament final in 2015. This year's squad could be one of their best-ever with top prospect Megan Walker, sharpshooter Amber Ramirez and the tallest player in the tournament, Sidney Cooks (1.93m). Don't miss our feature on the Top 10 teams to watch in Kazakhstan.

4. The number one 3x3 players in the world in both U18 men and U18 women categories will be in Kazakhstan. For Nedim Muslic (Qatar) and Veronika Kányási (Hungary), this is a golden opportunity to show their ranking is not a fluke.

5. New Zealand beat Spain in the men's semi-finals last year. Hungary defeated Israel in the women's bronze-medal-game in front of their home crowd. Spain and Israel both returned home without a medal but revenge is a dish best served cold and these teams will meet again as soon as the Pool Stage. Check out our full list of the Top 5 pool games to watch.

6. The FIBA 3x3 U18 World Championships are also a chance for countries without a giant basketball tradition to shine. Guatemala and Kazakhstan will make their first-ever appearance in the women's tournament, Belgium will make their debut in the men's tournament. For the United Arab Emirates, it will be a first time at the event in general.

7. Kobe Paras' amazing double at the Dunk Contest attracted millions of views. You won't believe how high these teenagers can jump. Two other individual contests will be held: a brand new skills contest and the mixed shoot-out contests, where women generally dominate men.

8. 3x3 events are proper urban culture festivals and the FIBA 3x3 U18 World Championships are no exception. The event will feature several concerts and performances from Ukrainian freestylers, Heroes of the Court.

9. Every single game is available in HD on FIBA 3x3's official YouTube channel, with the legendary Kyle Montgomery on the mic.

10. But there's more. Dunk highlights, Top 5, star profiles, mixtapes. Make sure to subscribe to our YouTube channel so you don't miss a beat.