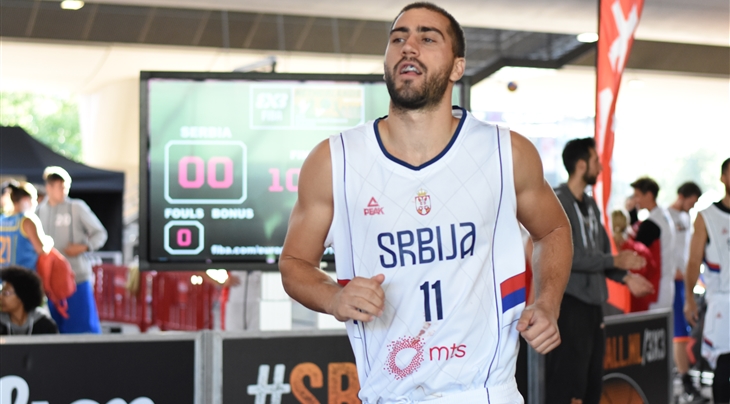 1. END OF THE RUSSIAN HEGEMONY? - Russia have completely dominated women's 3x3 these last few years with back-to-back wins at the 2014 European Championships and 2015 European Games. They won the France Qualifier and have two of the top 10 women to watch with Anna Leshkovtseva and Tatiana Vidmer. Anyone here can stop them?

2. SERBIA'S TIME? - Serbia have won the World Championships in 2012 and finished second in 2014. The European crown is the only missing in the trophy cabinet. Is it his year? If the men are not good enough, keep an eye on the women but don't blink because Jovana Vukoje is faster than Allyson Felix.

3. FRENCH GUILLOTINE - With a mixed martial arts fan nicknamed 'The Undertaker' (Charles-Henri Bronchard) and the brother of a taekwondo legend (Dominique Gentil), the French men's national team should not miss of fighting spirit in Bucharest.

4. BEST FANS IN THE WORLD - Back in 2014, the Romanian fans carried a team that was deemed too slow and too old to the European title! Nobody's betting against 3x3 legend Angel Santana anymore. Plus if the men's team was to fail, Gabriela Marginean and Sonia Ursu have fashioned the women's national team into a real contender.

5. TOP 5 MACHINE - What if the most spectacular player of the tournament was playing in the women's category? Next time Marjorie Carpréaux (Belgium) passes the ball, she won't look. But YOU should.

6. BULLETPROOF - The entrance to the AFI Palace Cotroceni is free but if it wasn't, there would be a lot people paying to watch Dusan Domovic Bulut. The Serbian star has been the undisputed number one 3x3 player in the world for over a year and has graced us with some of his most stunning playground moves lately.

7 - THE ARTIST - Olga Maznichenko was the top scorer at the European Games (and led Ukraine to the silver medal) and the top scorer again in the Qualifiers this summer. She drew a portrait of herself with a gold medal in Bucharest but said she would only post it if she actually took home the title. After all that teasing, we're sure you're rooting for Ukraine to win.

8 - FREESYTLE - 3x3 is a beyond sport experience and the Romanian organisers recruited one of the best freestyler crews in the world. The Heroes of the Court nearly won X-Factor Ukraine and are a must-watch on the livestream this weekend.

9 - DUNK YOU VERY MUCH - We know you like your dunks so we organised a little exhibition dunk contest on Sunday. The headliner will be a certain 'Miller' who made noise at the World Tour Prague Masters last month after beating 4-time World Tour dunk champion Rafal 'Lipek' Lipinski with some of the most powerful dunks ever.

10. MORE! Dunk highlights, Top 5, mixtapes. Make sure to do what 50,000 people did before you: subscribe to our YouTube channel so you don't miss a beat!