Team Doha's Dominic James eager to "win it all" 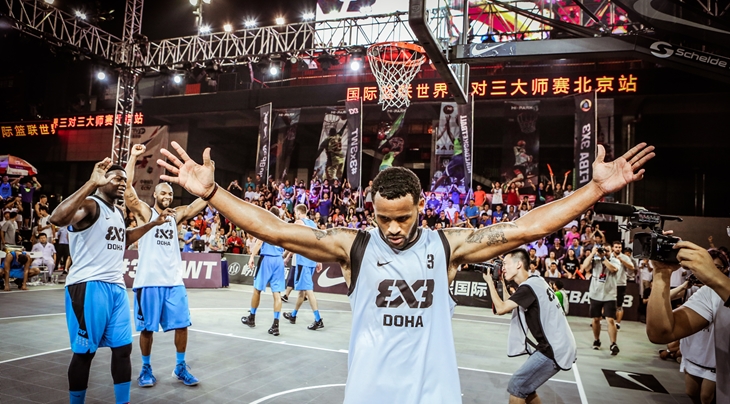 The high-rising Dominic James came with a bang at the World Tour last year, leading his team to the World Tour Final in Abu Dhabi and finishing 10th overall in scoring. His stellar season ended in disappointing fashion in Abu Dhabi with a shocking elimination in the pool stage, something he says only brings more "fire" to his motivation. We caught up with the 29-year-old as he prepared to earn a spot to the 2016 FIBA 3x3 World Tour at the Doha Challenger.

FIBA.com: How motivated are you to go back to the World Tour?

Dominic James: I'm EXTREMELY motivated! Last year was a great opportunity to travel the world and play against the best teams. 3x3 is gaining more popularity and could be added to the Olympics. It is great to be a part of a movement that is growing before our eyes.

Last season provided me with memories for a lifetime. - James

FIBA.com: You were upset in the pool stage of the World Tour Final last season. Is that extra motivation?

DJ: It felt like fire to lose so early last year. We should have done better, especially since we beat the team that reached the final in the other pool game. It shows that you can lose one game and it's all over and that any team can beat anyone on any given day. I have a lot of respect for all these teams but I want to win it all this year.

FIBA.com: What were the best memories at the World Tour last year?

DJ: Obviously there's the bank winning-shot to win the Beijing Masters. The atmosphere and the crowd were unbelievable in Manila. The whole experience was great. I have to say beating Novi Sad Al Wahda in Beijing was great. If you beat them, you know you can compete at the best level.

FIBA.com: Which changes did you make to the team?

DJ: Our leader Yaseen Musa sustained an injury yesterday [on 29 March] so he will miss the Doha Challenger. I hope he comes back soon because he is the type of player who would do anything to win. It is the kind of person you really want on your team. Sammy Monroe is a one of the most talented players I have ever played with so obviously this is a big loss. But we have a very good and interchangeable team with Tanguy Ngombo who can play any position. Erfan Ali Saeed is a fighter in the paint and we will try out at the Doha Challenger a very young talented kid, Abdulrahman Mohamed Saad. It will be the first time we play together as a unit but I have played with or against everyone of them before.

FIBA.com: What are the main goals this season?

DJ: I'm keeping it simple. It's not about myself. I want to represent all the people who believe in me here in Qatar. I want to go out and play and win it all.