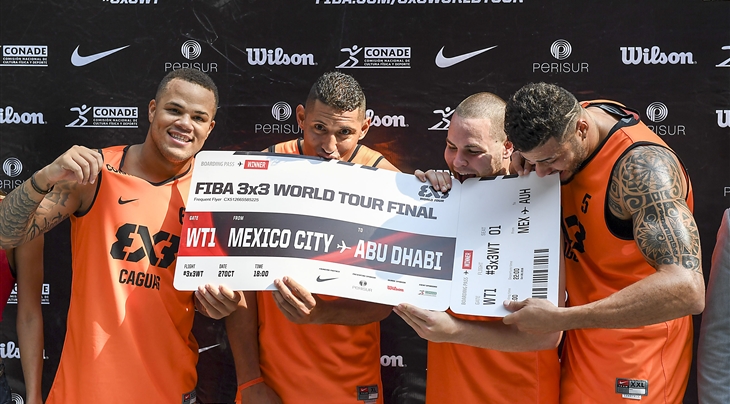 The Puerto Rican side becomes the first squad to stamp their ticket to the World Tour Final in Abu Dhabi on 27-28 October.

With his team down 19-20, 24-year-old Wil Martinez rushed to the baseline, turned and hit a cold-blooded corner two for the championship.

His team-mate big man Luis Hernandez topped all scorers in the final with 8 points and was an intimidating presence on the defensive end. Martinez added 6 points and so did tournament MVP Jonathan García.

Team Caguas sported a 'CORKY' sign on their jersey in tribute to the late Andy 'Corky' Ortiz, who won the inaugural edition of the World Tour with García back in 2012 and tragically died in a car accident on 23 May 2015.

"It was like an angel was here," an emotional García declared after the game.

NY Harlem lost in the final of the Mexico City Masters for the second year in a row despite big man Edis Dervisevic contributing 6 points in the final and 'Disco Domo' Jones leading all scorers over the weekend (44pts overall).

Hamilton (CAN) star Victor Raso tied a World Tour record in the Shoot-Out Contest by scoring 14 points, including two shots from the end of the 3x3 court.

Jordan 'Flight' Southerland (USA) put the massive crowd at the Perisur shopping mall to its feet after a dazzling performance in the Dunk Contest.

The second Masters of the season will be staged in Utsunomiya, Japan on 30-31 July and feature World Tour reigning champions Novi Sad Al Wahda (UAE).