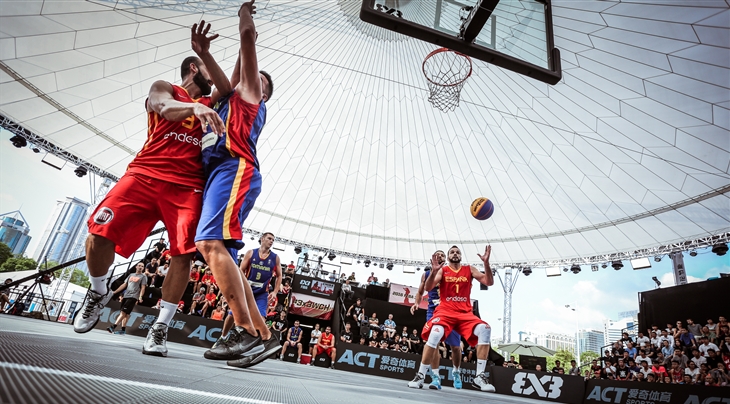 Team of the Day: Spain (men)

Just one day after the women’s national team beat USA and qualified for the quarter-finals, the men advanced as well. The team featuring 4 Malaga natives is now 4-0 in China after beating Poland (20-8) and Romania (21-16) on Friday. Jose Rojas was feeling it once again and had 12 points, including 4 two-pointers. The number 50 player in the world ranks 8th overall in scoring with 27 points.

3x3 is definitely a chance for new nations to shine in basketball competitions and Indonesia nearly reached the quarter-finals of the 3x3 World Championships after a 21-20 upset of Egypt. Egypt’s 20-year-old rising star Mido Mohamed had a game-high 10 points but Indonesia stood strong and escaped with the one-point win on a Vinton Nollan’s lay-up. Nollan scored 6 points in the win but the hero was another 20-year-old, 2014 3x3 Youth Olympian Rivaldo who contributed 9 points, including 3 shots from behind the arc.

On Friday, Jacobine Klerx showed the Kobe in Jacobine with back-to-back double-digits games. After scoring 10 points against New Zealand, she had 10 of her team’s 14 points in the do-or-die one-point thriller against Poland (14-13). The 21-year-old now ranks 2nd in the scoring list with 33 points.

France started the day against Cook Islands but it was sharpshooter Perrine Le Leuch who was cooking on Friday. The 33-year-old - one of just two women who have competed in all 3 editions of the 3x3 World Championships (the other is Argentine’s Natacha Perez) - was red hot from behind the arc, finishing the game with 6 two-pointers.