Spain impress on Day 2 at FIBA 3x3 U18 European Championships 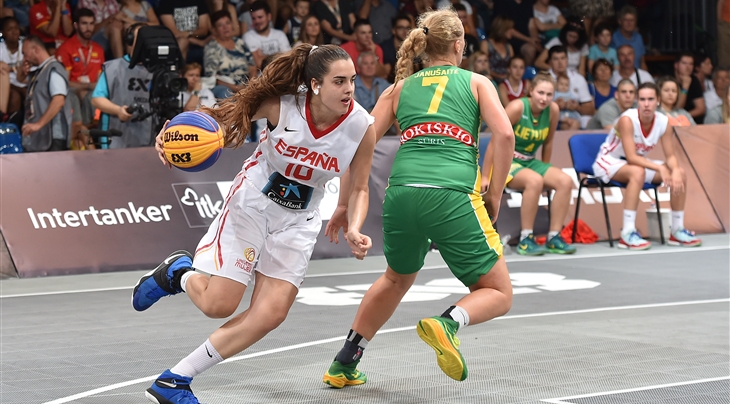 After winning bronze at the 2015 3x3 U18 European Championships and 2016 3x3 U18 World Champions, Spain lived up to their ambitious goals in Pool C by winning back-to-back games against Czech Republic (15-10) in a rematch of Astana's bronze-medal game and Lithuania (21-5).

Spain were the only women's team to finish a game before the 10-minute mark on Saturday.

France also remained undefeated but shined defensively instead. The reigning World Champs conceded 8 points against Austria and just 6 versus Switzerland.

The thriller of the day in the women's category was the game between Austria and Switzerland. With time winding down and her team down by one, Austria sharpshooter Michaela Wildbacher unleashed a corner two, that bounced three times on the rim before rattling out.

In the men's category, the Hungarian hosts rewarded a loud crowd with two wins in Pool C against the reigning European Champs Turkey (21-15) and versus Latvia (16-14). They did it in style with countless highlights, including Krisztofer Durazi's mean alley-oop.

Germany amazed in Pool D with big wins against Belgium (20-14) and Serbia (16-13). Big man Noah Kamdem brought his very own contribution to the Top 5 with a big dunk and a monster block.

In the Shoot-Out Contest Qualifier, Astou Gaye (France) and Sara Krumpholcova (Czech Republic) joined Hugo Bartolomé (Andorra) and Tanalp Sengün (Turkey) in the final, which will be staged at 6.50pm local time (GMT+2) on Sunday.

The FIBA 3x3 U18 European Championships come back on Saturday 10 September with the teams in Pool C and D from 5pm, live on facebook.com/FIBA3x3 and in HD on youtube.com/FIBA3x3.