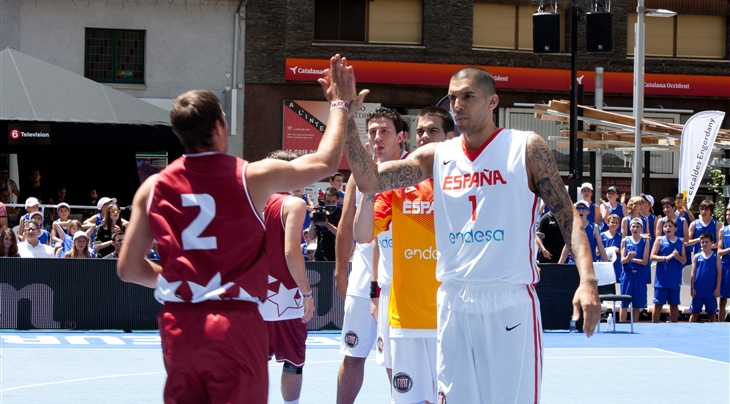 They won silver at the European Games last year and now they're coming for gold: Alex Llorca and Nacho Martin were unstoppable on the first of two days of competition in Andorra.

The Spanish one-two punch finished the day 4th and 5th in scoring and won all 3 games before the 10-minute limit (against Ireland, Georgia and Latvia) in Pool A.

Two more teams remained undefeated in the men's category: Slovenia (led by top scorer Gasper Ovnik) in Pool A and Ukraine in Pool B.

In the women's tournament, Slovenia and Switzerland won their both games in Pool B while in Pool A three teams are tied with 2 wins after one day: Austria, Hungary and Romania. Speaking of Romania, the talented Gabriela Marginean led all scorers on Saturday with 23pts.

The pool stage continues on Sunday morning with the top 4 teams from each pool making it to the quarter-finals. The winners of all quarter-finals will stamp their ticket to the 2016 FIBA 3x3 European Championships in Bucharest, Romania on 2-4 September. If Romania's women - automatically qualified as hosts - win their quarter-final, the team ranked 5th in the final standings would qualify as well.