Spain bring their 3x3 skills to the full court 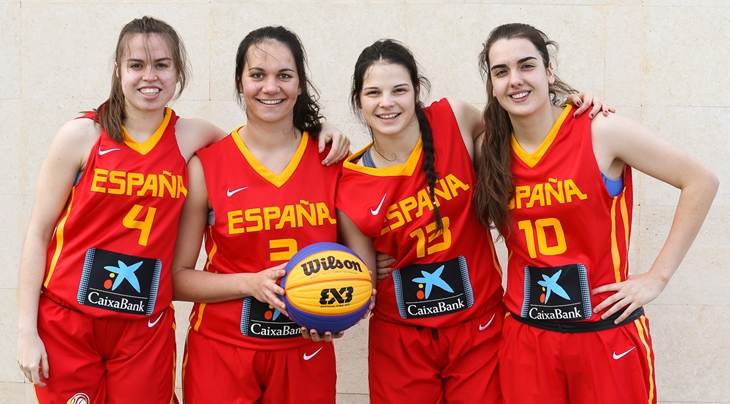 SOPRON (FIBA U18 Women’s European Championship 2016) - While full-court five-on-five basketball is their bread and butter, Spanish pair Paula Ginzo and Naira Caceres can bring an extra dimension to their game from their medal-winning exploits at 3x3.

The pair have already tasted success at the FIBA U18 Women’s European Championship, as part of the gold-winning squad led by Angela Salvadores and Maria Conde in Celje in 2015.

And in June, they travelled along with Lucia Alonso and Laia Sole, both also key squad members here in Sopron, to the 2016 FIBA 3x3 U18 World Championships in Kazakhstan, coming back from a close semi-final defeat to France to take the bronze medal against Czech Republic.

The 3x3 format offers an interesting variation. "I prefer it in some ways," states Ginzo, who has climbed up all the way to second overall in the U18 women’s individual world player rankings in the shorter form of the game.

"The intensity is different. 3x3 is a shorter game, and you have to make more decisions in a shorter period of time," says the forward, who has been carrying a slight injury but came off the bench to deliver a stellar performance of 22 points, 14 boards and 5 steals in Spain’s Quarter-Final victory over Turkey on Friday.

Caceres chimes in to point out the spatial differences in a half-court setting: "I notice it in defence. In five-on-five you always have the help side - if the player you’re guarding wants to make a lay-up, there’s always someone behind you. But in 3x3, you have to be responsible for your player, because if not, they’re going to make a basket."

While the two formats can lend themselves to a different style of play, both players are quick to credit their involvement in 3x3 tournaments with developing their all-round game. "You have to be very explosive and very fast to be able to make baskets…it helps us in practice, we practice being more explosive and then in five-on-five, usually we are faster than the other players. And also mentally we are faster, because we make decisions in a shorter period of time," says Caceres.

The evidence is clear, with both players plus playmaker Alonso and forward Sole showing great maturity in their play as they navigate to the later stages of the tournament.

Of course, Ginzo and Caceres are also able to call upon their experience in Spain’s golden run in Celje last year, where the Spanish team started slowly but peaked at the right time, dominating previously unbeaten France in the Final.

"We had three overtime matches, we didn’t expect that, and then we lost against France in the Second Round. So we were up to our necks in it, but then we were able to come together as a team and produce our best performance when it mattered," recalls Caceres.

The frontcourt duo also have extra chemistry now from the added hours spent playing 3x3 - so when they play Russia in the Semi-Final on Saturday, the Russian team will have to be wary of giving them the space that they’re looking for to secure another medal.