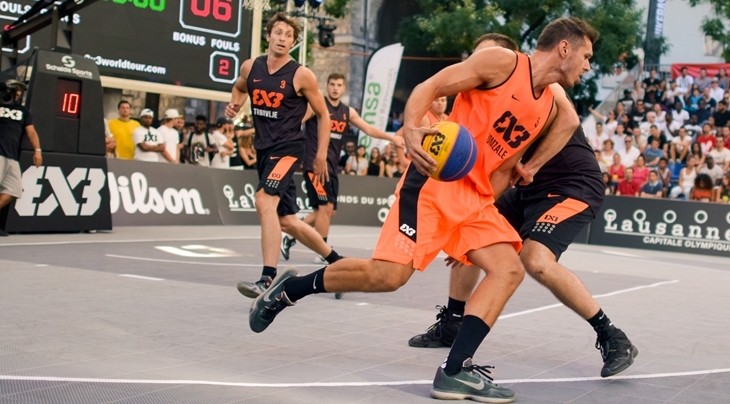 The 26 year-old Slovenian can barely hide his excitement: "Our capital Ljubljana has less than 300,000 inhabitants. The whole of Slovenia is around 2 million people. Tokyo is more than 13 million people alone! This is a big massive city! This is my first trip to Japan, well, it will be my first in Asia, period."

This 10,000km journey starts with another long trip. Back in 2014, the 2.01m versatile big man flew to Salvador de Bahia, Brazil for the FISU 3x3 World University Championships where he represented his country. Though his team would only finish ninth, it was the start of something much bigger for him.

"There was a Japanese team at that event. We spoke and stayed in touch with the players and the delegation," he recalled. "I played well at that event so last year they contacted me and told me one team would be interested in me. We were playing great with my friends from Team Domzale so I said no."

Snoj and his team broke through last season, making their first FIBA 3x3 World Tour appearance in Lausanne (finishing seventh). He climbed up the FIBA 3x3 Individual Ranking and now sits at 27th. But while he was preparing to make the next step this summer, he suddenly got more offers.

"All of a sudden, it was three different teams who wanted me," Snoj explained. "I spoke to all of them and Tachikawa.EXE were the most persuasive. They got me all I needed. They're a very professional team, owned by a city located in the outskirts of Tokyo."

The ultimate goal is to go back to the World Tour! - Snoj

While he is far from his native Slovenia, the ambition remains the same for Snoj: returning to the FIBA 3x3 World Tour, a real possibility since the team that will lead the .EXE Premier League after four rounds will earn a ticket to the Utsunomiya Masters and the league winners at the end of the season will make it to the Beijing Masters.

"This is exactly the reason why they brought me here," Snoj said. "I don’t know the whole team yet but they also recruited Luke Evans, a US player who topped all scorers in a professional basketball league in Japan and Ken Tanaka, who played the Beijing Masters last year."

This league is great for the development of 3x3! - Snoj

The .EXE Premier League is expanding and Snoj is aware of his status as a pioneer for a lot of 3x3 players in Europe and the rest of the world.

"They take things very seriously and teams already have plenty of fans. Two hours after FIBA.com published the story about the pro 3x3 Japanese league with my name in it, I had the best 3x3 players in the world calling me to have more details," he pointed out.

"I'm going there with a great deal of respect. I want to play as good as I can for them. This is not a short term thing. I want to go back for years to come."