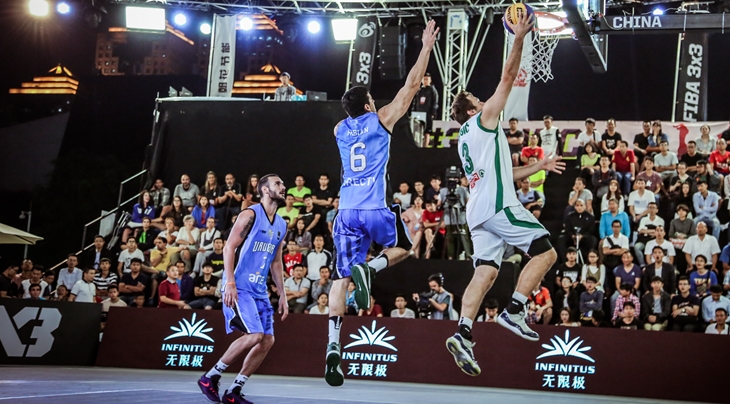 Team of the Day: Slovenia (men)

The European Champs wasted no time on Wednesday, winning back-to-back games before the limit. Even more impressive, they kept both opponents under 10 points (9 for Uruguay, 7 for Indonesia). The rejuvenated Simon Finzgar led Slovenia with 13 points including 4 shots from behind the arc.

Game of the Day: Romania – Philippines (19-21) The challenge was difficult on paper for the Philippines, facing 3 of the 4 players who helped Romania win the 2014 FIBA 3x3 European Championships. It became improbable after a few seconds when Russel Escoto hurt his shoulder and the Filipino squad were forced to play the rest of the game without substitute. Glenn Khobutnin responded with an array of devastating drives to the basket (10 pts), Mark Belo added 6 and Karl Dehesa hit the nail on the Romanian coffin with an ice-cold two-pointer.

Player of the Day: Glenn Khobuntin (Philippines) While Mark Belo and Russel Escoto came with some hype following their performance at the FIBA Asia Challenge, Khobuntin’s presence nearly came unnoticed. Things changed quickly in the upset of Romania, where he showed great finishing skills after contact at the rim. The 25-year-old added five in a narrow loss against Spain.

Scoring is not everything. What if the player of the day in the women’s category had scored just 1 point in 2 games? After shining in the FIBA 3x3 U18 World Championships last year, the daughter of two-time Olympian Leanne Walker wowed the Chinese crowd with her court vision and crazy bounce passes.

The men’s shoot-out contest qualifiers will be held on Thursday 13 and Friday 14 October.