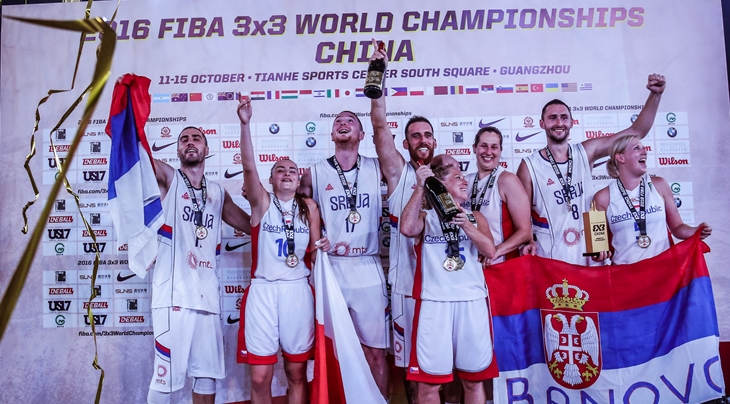 With Guangzhou's iconic skyline on the horizon, Serbia confirmed their domination of 3x3 basketball. After winning gold in Greece in 2012 and silver in Russia in 2014, Serbia returned to their winning ways in China after defeating USA 21-16 in the final.

The number one 3x3 player in the world Dusan Domovic Bulut and sharpshooter Dejan 'The Maestro' Majstorovic combined for 16 points in the title game while big man Marko Savic contributed 4 and defensive specialist Marko Zdero had 1.

It was the US team's first-ever loss in a 3x3 game after 28 consecutive wins. Stefhon Hannah had 6 points in the losing effort while Myke Henry added 5. Highlight machine Alfonzo McKinnie and Kavon 'Happy Feet' Lytch scored 3 and 2 points respectively.

Slovenia won bronze after defeating Spain in a 17-16 nail-biter. Their star player Gasper Ovnik represented the reigning European champions on the Team of the Tournament, together with MVP Bulut (Serbia) and scoring runner-up Henry (USA).

Interestingly, 11 of the 12 medallists at the World Championships will participate in the final of the professional 3x3 season – the FIBA 3x3 World Tour – in Abu Dhabi on 27-28 October.

In the women's category, Czech Republic went from beating the Cook Islands in overtime on Day 1 to the world title.

After defeating reigning champions USA in the semi-finals (21-18), the Czechs demolished Ukraine in the final (21-11).

The team featured 2016 FIBA 3x3 U18 European Championships MVP Sara Krumpholcova - who scored a game-high 8 points in the final - and two-time Olympian Michaela Uhrova, who was named MVP of the tournament.

Uhrova became the first-ever athlete to win the World Championships in basketball and 3x3.

She was joined on the team of the tournament by Linnae Harper (USA) and Ganna Zarytska (Ukraine).

USA were the only team to win a medal in both categories as the women defeated Spain (20-14) for bronze.

Nine more medals were handed out in the individual contests.

The dunk contest competition was open to professional dunkers for the first time. One of them - Dmitry 'Smoove' Krivenko (Ukraine) – struck gold after wowing the Chinese crowd with his acrobatic jams. Alfonzo McKinnie brought USA their fourth medal of the week while Marco Favretto (Italy) collected bronze.