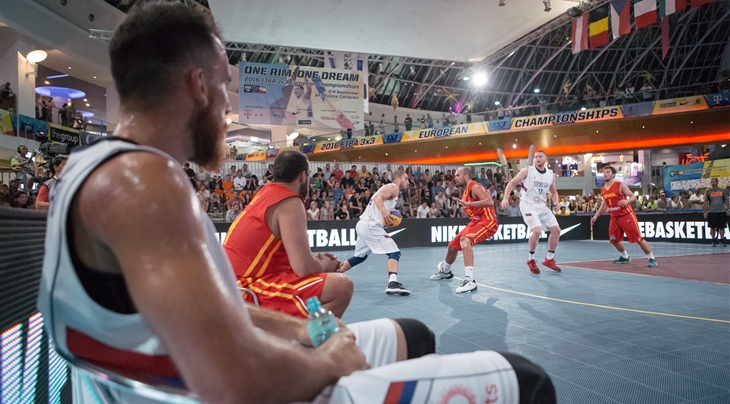 Serbia's men lived up to the hype on the opening day with back-to-back wins against France and Spain in Pool A. The number one 3x3 player in the world Dusan Domovic Bulut scored in double digits against Spain and finished the day in third place in the scoring list (15 pts).

Serbia's women survived in an insane Pool B, which included two teams (Ukraine and Italy), that finished second in their respective qualifiers. Dragster Jovana Vukoje led Serbia past Italy but could not stop Ukraine.

The talk of the day was Ukraine's thrilling overtime win against Italy. The team trailed all game with just 3 players after Olga Maznichenko sustained a facial injury against Serbia. Anna Zarytska then stepped up with a cold-blooded two to send the game to overtime before hitting the dagger from long range in overtime. She led all scorers on Day 1 with 19 points.

Hungary was the only other undefeated team in the women's category after beating Belgium, Romania... and the loud Romanian crowd that absolutely packed the AFI Palace Cotroceni shopping mall. 29-year-old Petra Szabo scored a third-best 13 points on Day 1. Belgium went out after just two games but that was enough time for the spectacular Marjorie Carpréaux to shine.

Slovenia's men were the last team with a perfect 2-0 record on Friday as Gasper Ovnik topped all scorers with 17 points combined against Italy and Ukraine. The number 12 3x3 player in the world guaranteed his spot in the Top 5 of the Day with a crazy no-look pass above the head and a sizzling ankle-breaker.

You can follow the rest of the pool phase with men and women's teams in Pool C and D on Saturday 3 September on FIBA 3x3's Official YouTube channel from 17.00 local time (GMT+3).