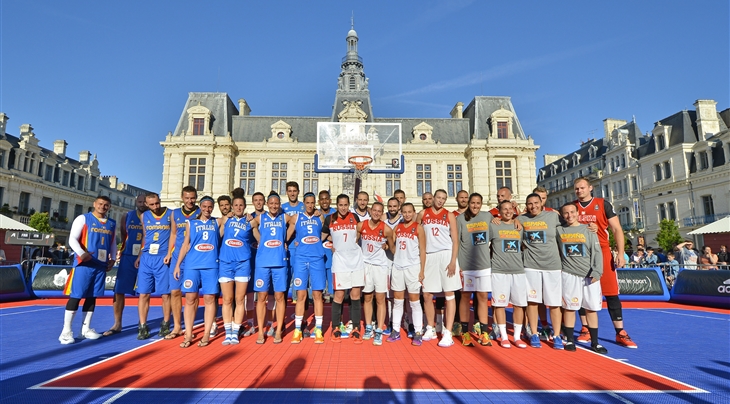 The iconic Place du Maréchal-Leclerc turned out to be a dream playground for the French men's national team, who dominated Italy 21-11 in the final.

There was no stopping Angelo Tsagarakis aka "The Star" in Poitiers. The French playmaker connected 15 times from outside the arc and led all scorers at the event with a whopping 43 points.

Italy's Gionata Zampolli showed some serious handles and an ability to shoot from anywhere on the 3x3 court and finished second in scoring (36 points).

In the women's category, Russia avenged a one-point pool stage loss against Italy... with a one-point win in the final (12-11) on an Ekaterina Sytnyak lay-up at the buzzer.

The towering (1.91m) Tatiana Vidmer was instrumental in the reigning European Champions' success and topped all scorers in Poitiers with 36 points.

Italy's one-two punch of Federica Toglianini and Alice Quarta were second and third (24 and 22pts respectively).

Overall, 6 teams secured their ticket to the 2016 FIBA 3x3 European Championships, which will be held in Bucharest, Romania on 2-4 September.

Men: France, Italy and Poland (Romania were already qualified as hosts and finished 3rd in Poitiers)

The event brought a large crowd to Poitiers' main square and was highlighted by Belgium's Terry Deroover's ankle-breakers, an amazing number of games going into overtime and a breath-taking dunk contest.