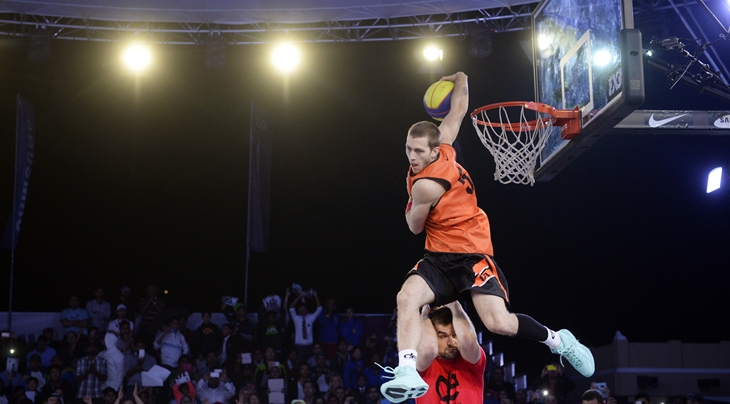 TORONTO (FIBA 3x3) - Canadian professional dunker Jordan Kilganon brings us behind the scenes of his viral appearance at the NBA All-Star Game.

Jordan Kilganon made a name for himself for the last two seasons at FIBA 3x3 events with his insanely creative dunks. On 11 December 2014, the 1.85m leaper performed his signature "scorpion dunk" for the first time in a contest at the FIBA 3x3 All Stars. A little more than a year later, it is the same dunk that helped him become a TV sensation following a short cameo at the NBA All-Star Game on 14 February 2016. The 23-year-old tells FIBA.com about that crazy night and his goals for the season.

FIBA.com: In a matter of 10 seconds, you got to perform your signature dunk in front of millions of people worldwide and shook hands with Drake and Dwyane Wade. Speak about all the crazy things that happened to you ever since that dunk and your state of mind right now.

Jordan Kilganon: Ever since that happens, my phone just exploded. I still haven’t gotten back to Earth. I had this crazy, crazy amount of attention. I feel a little exhausted from everything that has been going on and all the shows I performed before that so it’s being nice now, just being able to catch some days off and then just get back to training. To get all this recognition is cool but all I really care about is get back to the gym and improve and hit new dunks.

FIBA.com: How were you approached by the NBA? Speak about the preparation for the dunk - which you performed in street clothes - and the level of stress you must have had considering you had to make a very difficult dunk in one take.

JK: So the NBA actually contacted me and my manager from Dunkelite and I assume it´s been through all the social media buzz, the YouTube videos and everything that has been going on lately. It’s funny with the whole "doing dunks in jeans" because this is not as restricting as people would think. I’d like to pretend it is super hard to do it in jeans but it really was something I’ve done before. A lot of times I would show up in the gym with jeans and get carried away. I have done 360 between the legs in jeans. The NBA wanted me to dunk in jeans and the reason is they wanted to make it look like I was picked up from the crowd. When they asked me, I said it was no problem. It’s a pretty easy thing for me to do.

FIBA.com: What is the exact origin of the Scorpion Dunk?

JK: Most of it came from a dunker called T-Dub and plenty of other low-rim dunkers. T-Dub tried to dunk it behind his back the same way you would dribble behind your back on an 8-foot rim. You’d have to get your whole hip above the rim. This is how I end up inventing most of my dunks. I look at dunks and tweak them until they become possible. I fixed this dunk until it was eventually possible on a 10-foot rim.

FIBA.com: Speak about the first time you executed it in a dunk contest at the 2014 FIBA 3x3 All Stars.

JK: This was a big moment for me because I really thought they brought me out just because of the Scorpion Dunk so I literally had no choice but to do it even though it was such a hard dunk for me at the time because it is a no-look dunk. Now I have done it so many times that it is like automatic but at the time it was a little harder to get so I was a little nervous. I practiced just for that dunk for a week straight! When I hit it, I didn’t know if I had made it it until I saw the crowd react. I felt like I did my job. I was happy because this is why you brought me out.

FIBA.com: What are your objectives this year? You lost in the final of the FIBA 3x3 World Tour Dunk Contest last season. Are you coming back this year to show you’re the uncontested new king of dunk?

JK: My objectives are pretty much the same year that I had last year which is to continue pushing dunking, inventing new dunks that no one has thought of or done before. That’s really what I care about. My passion lies in creating new things. I feel like I am much better than what I showed last year. In the dunk contest [of the FIBA 3x3 World Tour Final], I came out with three new dunks never done before at a dunk contest right off the bat. Then I missed a dunk and ended up slipping and if I wasn’t for that, I believe I would have been the champion. Next year I believe it should not be a problem.