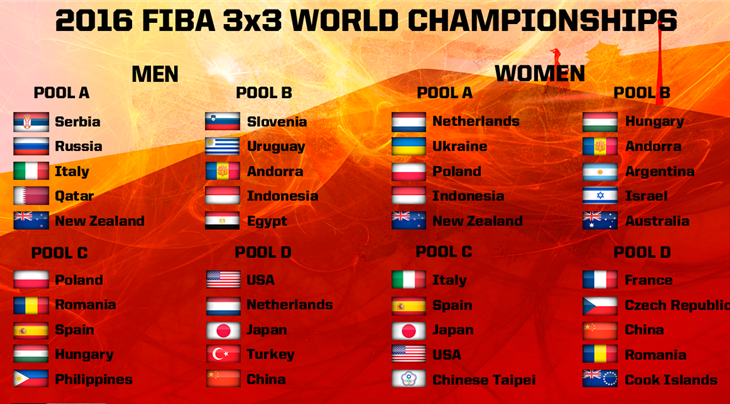 Some may disagree on the definition of a hard pool. However Pool A in the men's category is likely to reach unanimity. It features all 3 medallists of the previous edition! Reigning champions Qatar, silver medallists Serbia and 3rd place Russia will meet in the same pool and only the best 2 teams advance to the quarter-finals. To make things even more insane: 2016 FIBA 3x3 European Championships quarter-finalists Italy and two-time FIBA 3x3 U18 World Championships winners New Zealand are added to the mix.

In contrast, Pool B is a haven for Slovenia. The recent European champions will face Andorra, Egypt, Indonesia and Uruguay. None of these teams has ever reached the quarter-finals of the World Championships.

Pool C will be very interesting to watch with 3x3 star Terrence Romeo leading the Philippines in an otherwise all-European affair. Poland, Romania and Spain all made it to the quarter-finals of the European Championships two weeks ago. Hungary have won gold in Romania in the women's category and are now looking to shine with the men's team too.

The US have yet to win a medal at the 3x3 World Championships in the men's category and will be the heavy favourites in Pool D, which also features the Chinese hosts. Japan, Turkey and European Championships bronze medallists, the Netherlands will complete the pool.

Of course it has been a completely different story for the US in the women's category. In fact, the girls have won both previous editions, with Skylar Diggins in 2012 and with Jewell Loyd in 2014. The American team will start things off in Pool C with two European countries with a rich basketball tradition (Italy and Spain) and two Asian teams (Chinese Taipei and Japan).

The brand new European champions Hungary will headline Pool B with Australia and the two-time Olympian Jennifer Screen. Andorra, Argentina and Israel complete the pool.

Last but not least, Pool A will feature three European teams (Netherlands, Poland and Ukraine, who struck silver at the 2015 European Games), Indonesia and New Zealand.

Fans can find more information about the event - including the full schedule - on the official competition website and react to the seeding on social media with the hashtag #3x3WCH.