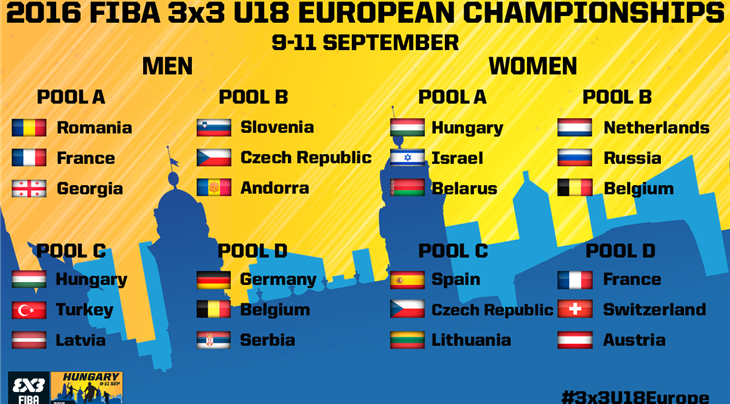 After 2 exciting qualifiers in Riga, Latvia and Szolnok, Hungary, the top 3x3 nations in Europe are brought together in the second largest city in Hungary, host of the 2015 FIBA 3x3 U18 World Championships.

With all that talent, the powerhouse clashes will start, as soon as the pool phase.

In the women’s category, Pool A will be something hardly ever seen before. One of the 3 medallists from last year’s edition will not make it out of the pool phase. Last season’s winners Hungary are bound to face 2015 finalists Belarus and bronze medallists Israel.

Pool A is hard but so 2015. Pool C will feature 2 teams (Spain and Czech Republic) who reached the semi-finals of the 2016 FIBA 3x3 U18 World Championships and 4 of the 5 top scorers of the U18 European Qualifiers (top scorer Sara Krumpholcová (CZE), Paula Ginzo (ESP), Livija Kaktaité and Brigita Gudelionyté (both LTU).

The French delegation will have good memories of Debrecen, where they won gold last year at the U18 World Championships. They come with a new group of girls, which retained the world title in Kazakhstan two months ago and will be the heavy favourites against Switzerland and Austria.

Last but not least, the inseparable Belgium, Netherlands and Russia meet again after battling it out in the pool phase of the Latvia Qualifier. Belgium has two cold-blooded one-point win in Riga while Russia beat Netherlands, which may have back the team who reached the quarter-finals of the 2016 U18 World Championships, where they notably beat USA.

In the men’s category, the winners of both qualifiers get to meet early in Pool B. Czech Republic reigned supreme in Hungary while Slovenia dominated in Latvia. Not great news for Andorra, who complete the group.

Pool C will be interesting to watch with last year’s winners Turkey meeting the Hungarian hosts and a talented Latvian team, which finished 2nd in the Riga Qualifier.

One of the stars of the U18 World Championships and top scorer of the qualifiers Dato Apxazava will star for Georgia in Pool A, which will also include France and Romania.

Finally, it is the great comeback of Serbia, who won the U18 World Championships back in 2012. A surprising Belgian team that finished second at the Latvia Qualifier and Germany will stand in their way.

The two best teams from each pool will qualify for the knock-out rounds, starting at the quarter-finals stage on the third and final day of competition on 11 September.

The schedule will be made public in the upcoming days.

Fans can find more information about the event on the official competition website and react to the seeding on social media with the hashtag #3x3U18Europe.