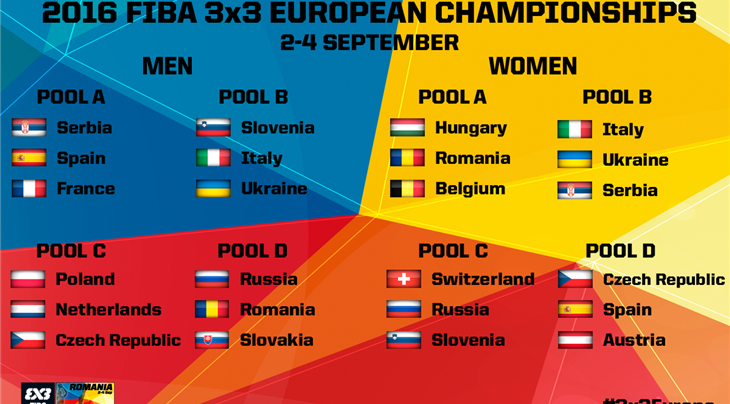 With just the best 12 teams making their way from the 3 Qualifiers in Andorra, France and Netherlands, all pools were bound to be loaded but Pool A of the men's tournament is the best reason to count the days till the start of the tournament.

The pool could have featured the winners of each one of the 3 Qualifiers had Spain not bowed down to Slovenia in the final of the Andorra Qualifier.

Serbia dominated the Netherlands Qualifier and France did not lose a game at home in the France Qualifier.

Pool C will be wide open with the Netherlands, who finished 2nd in the Qualifier which they hosted and two teams who barely qualified for the event (Poland, 4th in France and Czech Republic, 4th in Andorra).

Last but not least, Pool D will feature none other than the 2014 FIBA 3x3 European Champs (hosts Romania) and the 2015 European Games winners (Russia). Good luck to Slovakia (4th in the Netherlands Qualifier), which will complete the pool.

In the women's category, the two finalists of the 2014 edition will meet as early as the pool phase. Russia won the France Qualifier and Slovenia finished 4th in the Andorra Qualifier. To make things even more interesting in Pool C, the 2014 FIBA 3x3 World Championships and 2014 FIBA 3x3 European Championships quarter-finalists Switzerland join the pool.

Keep an eye on Pool A, who will bring together the winners of the Andorra Qualifier (Hungary), the hosts (Romania) and a team that finished 3rd at the 2014 edition (Belgium).

The top scorer of the Qualifiers, Olga Maznichenko (Ukraine) will get some serious competition in Pool B with the team that finished second in the France Qualifier (Italy) and third in the Netherlands Qualifier (Serbia).

Last but not least, Czech Republic impressed last month after winning the Netherlands Qualifier and will be put to test in Pool D with the bronze medallists of the 2015 European Games (Spain) and newcomers Austria.

The schedule will be made public in the upcoming days.

Fans can find more information about the event on the official competition website and react to the seeding on social media with the hashtag #3x3Europe.