Piran and Vilnius get rematch after Prague Masters seeding 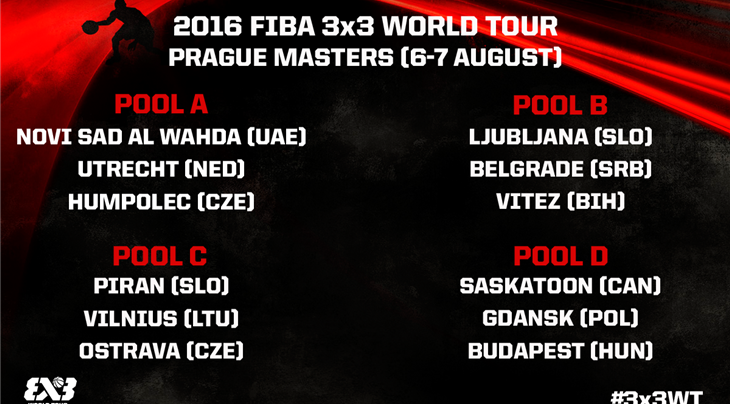 There was no stopping the young Vilnius team (25 on average) last year in Lausanne. 3x3 Lithuanian star Ovidijus Varanauskas led his team to a perfect record with a 17-13 victory against Piran in the final.

One year later, Piran get their chance to avenge this loss in the Czech capital. Now seems a good time as the Slovenian squad signaled their good form last weekend at the Utsunomiya Masters (2nd overall).

Things get better: Ostrava (CZE) complete Pool C. They finished 3rd at the Prague Masters in 2014.

The reigning World Tour champs Novi Sad Al Wahda (UAE) will headline Pool A, just one week after already clinching their spot to the Abu Dhabi Final by winning the Utsunomiya Masters. Team Utrecht (NED) and local favourites Humpolec (CZE) will be their first test. Novi Sad Al Wahda lost in the quarter-finals of the Prague Masters last year but won the two previous editions, in 2013 and 2014.

Pool B will bring together three teams from former Yougoslavia, including 2013 World Tour winners Ljubljana (SLO). Team Belgrade (SRB) is back in Prague this year after going all the way to the semi-finals last season and will star the man known as 'Mr Crossover', Dragan Bjelica. Last but not least, Vitez will be the first ever World Tour team coming out of Bosnia and Herzegovina.

Last but not least, 2014 World Tour runner-ups Saskatoon (CAN) get a second chance to qualify for the Abu Dhabi Final after finishing 3rd at the Mexico City Masters. They get a second shot at Gdansk (POL), a team that defeated them in the final of the Berlin Challenger just two weeks ago. Keep an eye on team Budapest, the youngest squad at the tournament (24 on average) and first-ever World Tour team from Hungary.

For those not attending the games in the UNESCO World Heritage site of Wenceslas Square (entrance is free!), pool games will start at 16.00 local time (GMT+2) on Saturday live on FIBA 3x3's official YouTube channel and Facebook Live. The top-two placed teams from each pool advance to a standard knock-out round which starts at the quarter-finals stage, from 16.30 local time on Sunday.