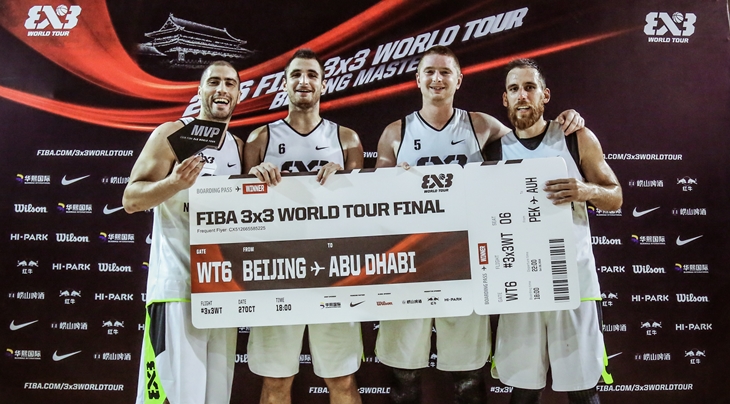 The reigning champions won their third Masters of the season (after Utsunomiya and Debrecen) following a perfect run in Wukesong Hi-Park, a sports centre entirely devoted to basketball.

Despite missing sharpshooter Dejan Majstorovic due to an ankle injury, Novi Sad Al Wahda dominated the final from start to finish.

The number one 3x3 player in the world Dusan Domovic Bulut had a team-high 7 points but it was a genuine team effort as Marko Dugosija scored 6 points while Marko Savic and Marko Zdero both added 4.

Bulut topped all scorers in China with 46 points and won MVP honours.

Michael 'Money in the Bank' Hicks had a game-high 8 points in the final for Gdansk and finished second in scoring. He was more successful in the final of the Shoot-Out Contest where he tied his own record with 14 points.

Novi Sad Al Wahda (UAE) already booked their ticket for the FIBA 3x3 World Tour Final since their success at the Utsunomiya Masters. As a consequence, no team qualified directly to Abu Dhabi from the Beijing Masters.

This said, the other three semi-finalists - Gdansk, St Petersburg (RUS) and Hamamatsu (JPN) - made giants steps towards a trip to the UAE capital considering they now rank 5h, 7th and 8th respectively in the World Tour season standings.

The top 12 teams in these standings after the last Masters of the season next week (24-25 September) in Mexico City (Americas Masters) will make it to the World Tour Final.

Last but not least, Jordan 'Take Flight' Southerland (USA) won his second World Tour dunk contest of the season, after his success in Mexico City.