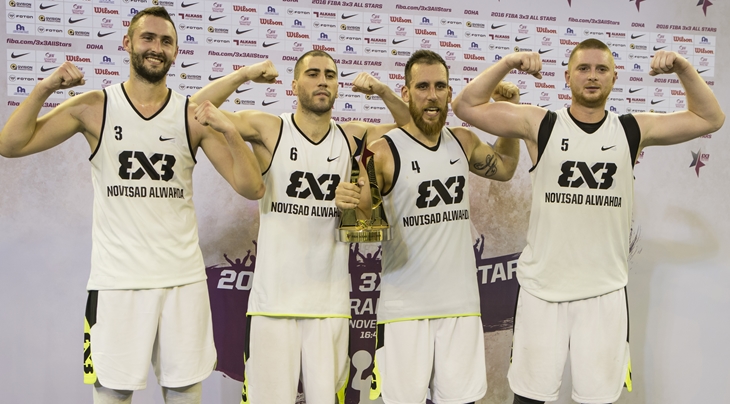 Just three weeks after missing out on a three-peat at the FIBA 3x3 World Tour, Novi Sad Al Wahda returned to their winning ways in impressive fashion.

The team won all 3 knock-out games with a 10-point advantage on average in the outdoor venue of the Gharafa Sports Complex.

The number one 3x3 player in the World Dusan Domovic Bulut won MVP honours in Doha after nailing the game-winner in the final and finishing second overall in scoring, tied with team-mate Dejan Majstorovic.

Majstorovic extended Novi Sad Al Wahda’s domination to the Shoot-Out Contest, where he scored 14 points, just one shy of the all-time record.

The 2016 FIBA 3x3 All Stars brought together the best players in the FIBA 3x3 Individual World Ranking from all over the world.

The season-ending event also featured the winners of the FIBA 3x3 World Tour, the FISU 3x3 World University League and the brand new Dew NBA 3X Tour, together with a Filipino All-Star Team.

About FIBA 3x3
Exciting, urban and innovative, 3x3 is inspired by several forms of streetball played worldwide and is considered the world’s number one urban team sport. Steered by FIBA, games see two teams of three players face off on a basketball half-court.