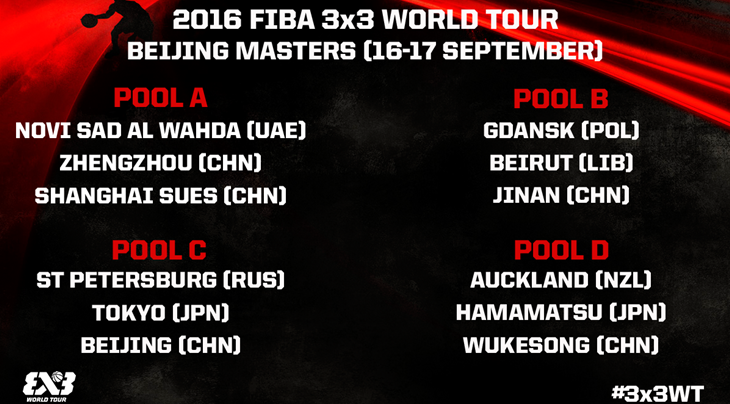 The recent winners of the Debrecen Masters will start with a rematch against Zhengzhou – they beat them 21-16 in the pool phase last year - before meeting the students from Shanghai SUES in Pool A.

Novi Sad Al Wahda will participate in their 4th Masters of the season, after Utsunomiya (1st), Prague (3rd) and Debrecen (1st). However, Dusan Bulut’s team won’t be the only squad in China with multiple appearances at the World Tour this season. In fact there will be one in each pool.

In Pool B, Gdansk are set for their third Masters of the season. Michael Hicks and co will face another Chinese team (Jinan) and Team Beirut (LIB), a regular at the World Tour.

After finishing 4th in Utsunomiya, St Petersburg (RUS) are back and will start things off in Pool C against two of the biggest cities in the world: Tokyo (JPN) and Beijing (CHN). 3x3 Japanese star Keita Suzuki will lead a team that won the 3x3 national championships while former NBA draft pick Ater Majok will headline Team Beijing.

Last but not least, it is wide open in Pool D with Hamamatsu (JPN) returning to the World Tour after their 6th place in Utsunomiya. They are up to a tough task with Team Wukesong (CHN), whose star player is nicknamed 'White Jordan' (Jordan Demercy) and Auckland (NZL), who have played in every edition of the World Tour.

For those not attending the games in the amazing setting of the Wukesong Hi-Park – a sports complex devoted to basketball in the middle of Beijing (free entrance) – the games will be available from 16.00 local time (GMT+8) on Friday live on FIBA 3x3's official YouTube channel.The top-two placed teams from each pool advance to a standard knock-out round which starts at the quarter-finals stage, from 17.00 local time on Saturday.