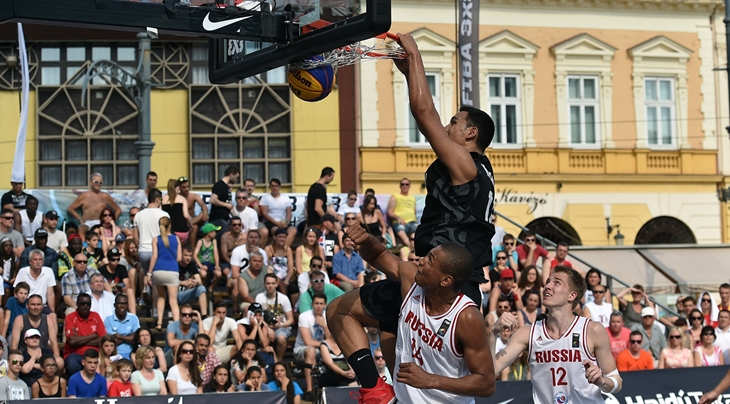 MIES (FIBA 3x3) - 2015 FIBA 3x3 U18 World Championships MVP Tai Wynyard took first place in the Top 10 Plays of the 2015 FIBA 3x3 season video. We have a look at the other stars featured on the highlight reel and the stamp they put on 3x3 basketball last season.

10. Abdul Yahaya (Nigeria)
2015 was the year 3x3 basketball took over Africa with tournaments from Egypt to South Africa and national team competitions in Nigeria and Mali. It was also the year Abdul Yahaya put the entire state of Benin on a poster.

9. Dragan Bjelica (Belgrade, SRB)
At 1.89m, 'Gaga' Bjelica is not going to break the rim, but he will definitely break ankles. The man known as 'Mister Crossover' added new victims to his collection this season and proved that size doesn't matter in the skillful game.

8. Angelo Tsagarakis and Abdoulaye Loum (Paris, FRA)
Team Paris transformed the FIBA 3x3 World Tour Prague Masters into a dunk contest, were one of the only three teams to beat the champs Novi Sad Al Wahda in five World Tour events and already look like the main threat to their three-peats in 2016.

7. Juan Vasco Trabado (Spain)
Don't judge a book by its cover. There is a reason why Trabado's favourite player is Arvydas Sabonis. Spain shined at the 3x3 event of the first-ever European Games, winning silver, and Nacho Martin and co could look to climb one last step this year at the FIBA 3x3 European Championships.

6. Dejan Majstorovic (Serbia)
The video of 'The Maestro’s' circus shot was one of the main attractions at the European Games and topped over 200,000 views on YouTube. Nice but did he call glass?

5. Sammy Monroe (Doha, QAT)
On the same night that Canadian pro dunker Justin Kilganon did his amazing scorpion dunk, the super-athletic Sammy Monroe climbed over the Great Wall of China at the Beijing Masters.

4. Martin Ariel Fernandez (Argentina)
3x3 and basketball are very different games, but one thing that does not change is the magnitude of beating Team USA. Spice it up with a buzzer-beater in overtime and you have one of the most emotional moments of the 2015 FIBA 3x3 U18 World Championships.

3. Bright Akhuetie (Philippines)
This dunk probably set a record for loudest crowd roar at a 3x3 event. Thousands of Filipino fans got to their feet when Bright Akhuetie put the number one U18 3x3 player in the world on a poster. Louder than a Justin Bieber concert.

2. Dusan Domovic Bulut (Novi Sad Al Wahda, UAE)
3x3 brings players from the streets to the World Stage. Four years ago, nobody knew about 'Mr Bullutproof' and now he's the number one player in the world, flag-bearer for Serbia at the European Games and the first player to become fully professional with a sponsorship deal with Red Bull.

1. Tai Wynyard (New Zealand)
It is one thing to make a streetball move in the pool phase or have a poster dunk in an exhibition game, and another to have the block of the year in the closing moments of a gold-medal game. Tai Wynyard dominated the FIBA 3x3 U18 World Championships at just 17 years of age… and he's already said he's hungry for more this year in June…