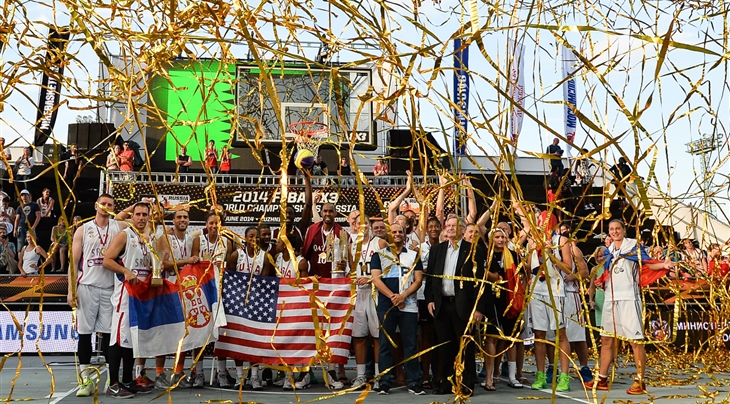 The French Basketball Federation (FFBB), the City of Nantes and the association "The Bridge" will organise the fourth edition of the most prestigious 3x3 national team competition on the iconic and popular site of the Parc des Chantiers, on the Isle of Nantes.

France has been at the forefront of the development of 3x3, winning four medals in the inaugural edition of the FIBA 3x3 World Championships in Greece in 2012.

Nantes is recognised as one of the most active cities in Europe in sports and cultural events, such as the 2016 FIBA Women’s Olympic Qualifying Tournament.

The event will be part of "The Bridge", a unique and historic transatlantic race between Saint-Nazaire and New York, which will celebrate the centenary of the 1917 landing by 2 million American soldiers to take part in the First World War and as a result of this, the arrival of American culture in France and Europe. Much more than just a race, and with Tony Parker as ambassador, The Bridge will be an opportunity to organise numerous festivities and events, based on two important themes of culture and Franco-American friendship: music and basketball.

All games at the 2017 FIBA 3x3 World Championships will be played on the same court with 20 men’s and 20 women’s teams competing in a team event and in three individual contests (men’s dunk contest, women’s skills contest and mixed shoot-out contest).

The selection of teams for the tournament is based on the FIBA 3x3 Federation Ranking at the cut-off date of 1 November 2016. The Ranking includes sport and development criteria, allowing both the strongest teams on the field as well as the most active countries to participate in the event, which fulfills a key aim of 3x3 - diversity. At least 30 different countries and territories from all continents will be represented at the event.

It will be the first time ever senior basketball world championships (3x3 or basketball) are held in France.

This said, the event will mark the second consecutive year that France hosts a high-level FIBA 3x3 event as Poitiers will organise a FIBA 3x3 European Championships Qualifier on 1-2 July this year.

Qatar’s men and USA’s women are the reigning FIBA 3x3 World Champions following their success in Moscow, Russia on 8 June 2014.

The 2016 edition of the FIBA 3x3 World Championships will be staged in Guangzhou, China on 11-15 October.