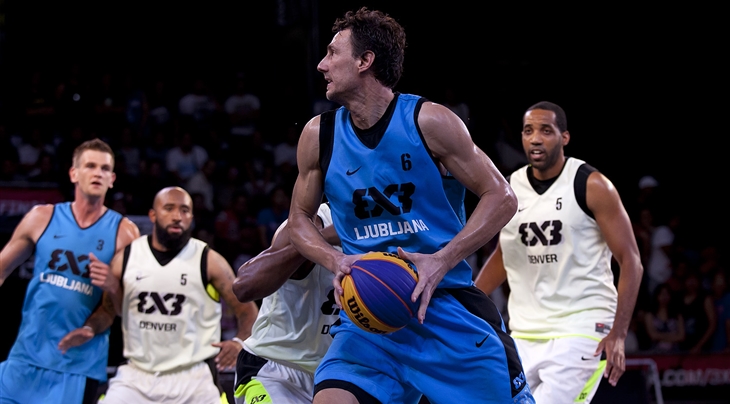 Four attempts, no success. In the last 3 months, Ljubljana had tried to make it to the World Tour in Qatar, Malaysia, Denmark and China but never reached the final. But then on the last weekend of June, tables turned for the Slovenian side.

"We finished the Abu Dhabi Challenger at 1am local time, slept for two hours, hopped on a plane, got a couple more hours of sleep, landed in Greece and at 6pm local time we were winning our second tournament of the week-end."

Ljubljana finished undefeated at the Abu Dhabi Challenger, even though the tournament featured 4 teams who made it to the 2015 FIBA 3x3 World Tour Final and former NBA player Donté Greene.

I have never seen my team play like this, so aggressive, diving on every loose ball. - Kunc

A big part of this 21-18 win was lefty Tomo Cajic, who joined the team last year and finished as top scorer of the challenger.

Kunc explained that after a year of learning the game and getting his body and mind ready for the 3x3 pro circuit, Cajic was now ready to contribute:

"He is in shape. He has been working the whole season. He is passionate. He is the one pushing us to practice. He’s taking it very seriously and he is producing."

In Greece, at the 3x3 Urban Legends Quest final, Ljubljana met again some familiar faces. They were up against Team Kolobrzeg (POL), that they had defeated the day before in the semi-finals of the Abu Dhabi Challenger.

Kolobrzeg featured two new players and the game was much closer than the 22-8 route in Abu Dhabi. Ljubljana finally won 18-15.

With these two wins, Ljubljana qualified for both the Utsunomiya Masters on 30-31 July and the Prague Masters on 6-7 August.

Ljubljana will hope to continue their good streak at the Lipik Challenger on 8-9 July, which can be watched live on youtube.com/FIBA3x3.