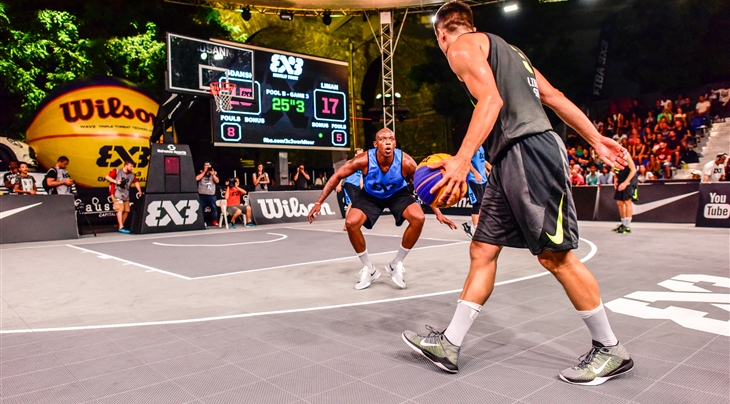 Stefan Stojacic locked down a certain Steph Curry 9 years ago at the FIBA U19 World Championship. Well, he shut down yet another lethal shooter with Michael 'Money in the Bank' Hicks in an 17-15 upset of the #2 seed in the tournament Gdansk on Day 1.

The young Liman team (25 years on average) had previously destroyed Team Manisa (TUR) 22-7 with 7 shots from behind the arc and topped Pool B.

Speaking of shooters, Saskatoon also went undefeated in a tough Pool A with victories over Paris (FRA) and Maribor (SLO). Number 10 player in the world Nolan Brudhel caught fire from distance and led all scorers on Day 1 (19 points, including 18 from behind the arc).

His team-mate Michael Linklater did not fill the stat sheet but got our commentator Kyle Montgomery pretty exicted.

2013 Lausanne Masters winners also had a clean 2-0 record on Friday with two victories before the 10-minute limit against Pavia (ITA) and Obrenovac (SRB).

But the story of the day was Team Lausanne's back-to-back wins against Zemun (SRB) and Valladolid (ESP) in Pool D. The Swiss team got the local crowd to its feet as Oliver Vogt scored a second-best 16 points in two games.

Also on their feet were a list of VIP including NBA Commissioner Adam Silver and 2016 FIBA Hall of Fame inductees Panagiotis Fasoulas, Hakeem Olajuwon, Manuel Raga and Michelle Timms.

Behind Brudehl and tied with Vogt are Paris star Dominique Gentil and Obrenovac playmaker Filip Simic.

The action resumes at 17.15 local time (GMT+2) tomorrow with the quarter-finals.