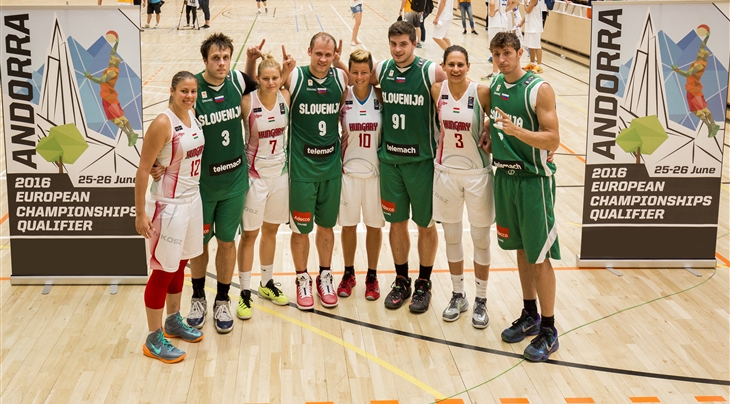 In front of a hostile crowd and with just 3 players in uniform, Slovenia pulled an amazing upset in the final against Spain (22-19). Gasper Ovnik hit some amazing shots but it was the exhausted Aden Kavgic who threw his last strength in a corner two for the win.

Alex Llorca topped all scorers at the event (55 points) but could not lead Spain to victory. He still made tons of new fans in Andorra over the weekend with his gaudy passes and deadly ankle-breakers.

In the women's category, Gabriela Marginean (Romania) won the scoring charts (46 points) but fell short for the second time in two days against Hungary (10-17 in the final).

While Hungary had 3 players among the Top 10 scorers, Dora Megdyessy stole the show in the final with a pair of big shots and some assists equally as flashy as her haircut.

In total, 9 teams punched their ticket to the 2016 FIBA 3x3 European Championships who will be held in Bucharest, Romania on 2-4 September.

It was a popular success for Andorra for their first-ever international 3x3 event as organiser.

The last 2 FIBA 3x3 European Championships Qualifiers will both be held on 1-2 July in Amsterdam, Netherlands and Poitiers, France.