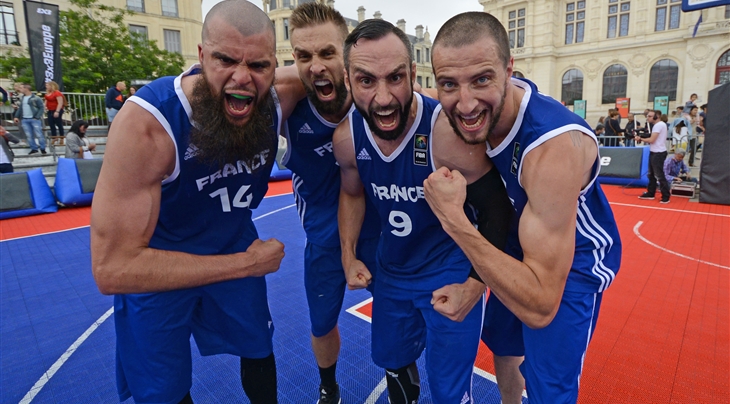 In the men's category, it wasn't a walk in the park - or the beautiful Place du Maréachal-Leclerc in this case - in Pool A for Les Bleus, who were even forced to overtime against Poland. Charles Bronchard scored two clutch free throws for the win in that game and Angelo Tsagarakis added some big shots and finished second in scoring on Day 1.

In Pool B, Italy impressed with two hard-fought wins against Hungary and reigning champs Romania, with Damiano Verri providing some highlights over the rim.

The Israeli big man Amit Tamir led all scorers with 21 points in 2 games.

In the women's category, France were the only single team to finish the day without a loss, after a defensive-minded game against Spain (13-7).

Italy continued the giant killing with the women as Alice Quarta & co had the upset of the day against reigning champs Russia (13-12), despite Tatiana Vidmer winning the scoring charts (17 points in 2 games).

Action resumes tomorrow at 12.50CET with the last pool games. Only the top two teams from each pool qualify for the semi-finals. The winners of each semi-final and the winners of the third-place game will earn a ticket to the 2016 FIBA 3x3 European Championships in Bucharest, Romania on 2-4 September 2016.