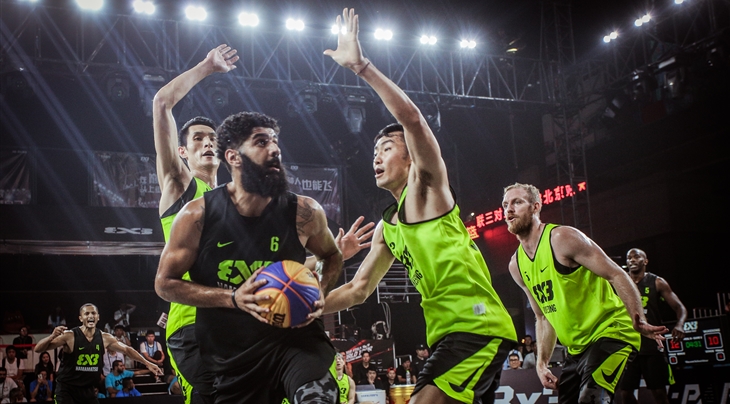 The winners of the Japanese .EXE Premier League stole the show at the Beijing Masters with back-to-back wins in Pool D against Auckland (NZL) (21-8) and Wukesong (CHN) (20-19).

Canadian big man Bikramjit Gill hit an impressive 8 shots from behind the arc in just two games for Hamamatsu while Japanese dragster Chihiro Ikeda abused his defenders with his cat-quick first step.

The US pair of playmaker Inderbir Gill and big man Chris Brown also did some damage on Day 1.

And if Team Hamamatsu did not sound cosmopolitan enough, Bikramjit Gill and Inderbir Gill have Indian roots.

Three other teams had a perfect record on Day One.

The two-time World Tour winners Novi Sad Al Wahda (UAE) were the only team to finish both games before the 10-minute mark.

The number one 3x3 player in the world Dusan Domovic Bulut led all scores on Day 1 and had one of the highlights with an insane between the legs move, driving to the basket.

In Pool B, Gdansk (POL) were the only squad to keep their two opponents under 10 points.

St Petersburg (RUS) won their only game of the day (19-12 versus Tokyo). Their second (against Beijing) was interrupted because of heavy rain.

Both this game and the match between Auckland (NZL) and Wukesong (CHN) were postponed to tomorrow Saturday 17 September.

The other highlights of the day was Atek Major's dunk contest AND block party against Tokyo (JPN) and Lin Jiang's game-winner for Jinan (CHN) in a do-or-die showdown against Beirut (LEB).

Jiang also qualified with the top score for the final of the Shoot-Out Contest. He will be joined by Gdansk's Michael 'Money in the Bank' Hicks, Auckland's Karl Noyer and Tokyo's Keita Suzuki.