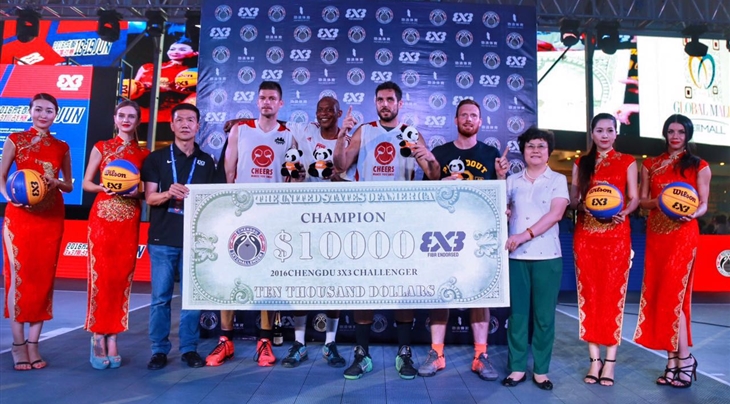 The US showman made more fans in China last weekend, scoring a whopping 50 points in just 6 games and helping his team defeat St Petersburg 22-12 in the final.

Turnt up in 🇨🇳 baby on to the next one

St Petersburg missed a chance to earn a spot to both Asian Masters after qualifying for the Utsunomiya Masters at the Penang Challenger. You surely couldn’t blame it on the versatile big man Ilya Alexandrov who led all scorers in Chengdu with 57 points.

Nine of the 16 teams featured in Chengdu previously played at the World Tour, including the 2013 edition winners, Team Ljubljana.

Dunk star Jordan Kilganon also brought the local crowd on its feet after nailing down his signature Scorpion dunk over 3 people and dunking over a car.

The next Challenger is scheduled for 24-25 June in Abu Dhabi and will feature the two teams who reached the title game of the FIBA 3x3 World Tour Final in the same city last year, Novi Sad Al Wahda (UAE) and Kranj (SLO).