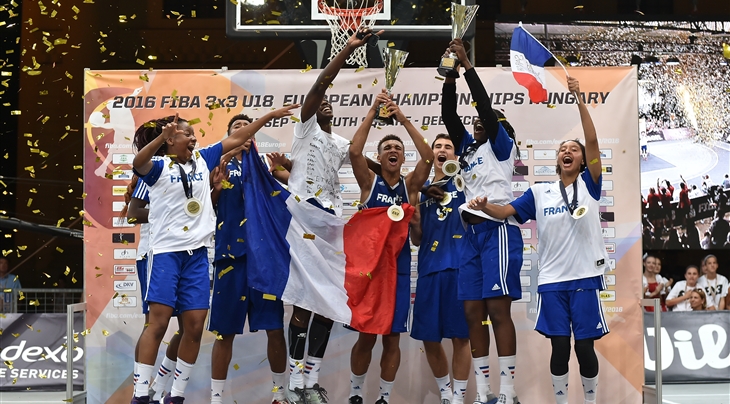 The medal harvest started in the afternoon for Les Bleus. After reaching the highest mark in qualification, Astou Gaye secured gold at the Shoot-Out Contest after just two racks. She finished with 13 points while Tanalp Sengün (Turkey) struck silver with 6 points and Sara Krumpholcova (Czech Republic) won bronze with 5.

Gaye then earned her second gold medal of the day after the reigning U18 World Champions defeated the Hungarian hosts in a nail-biting final (11-10). Diene Diane scored a game-high 5 points.

Gaye was held to just one point in the final but was an intimidating rim-protector. She joined Veronika Kanyasi (Hungary) and tournament MVP Sara Krumpholcova in the Team of the Tournament.

Krumpholcova finished the event second in scoring, hit the game-winner in the quarter-finals against Belgium and led Czech Republic past Russia in the bronze-medal game.

Russia's Svetlana Kramar was the top scorer in Debrecen.

France won their third gold medal of the day after the men axed Belgium in a spectacular final (19-15). The high-flying Paul Djoko scored a game-high 8 points. The diminutive Charles Perrier (1.80m) also had 8 in a losing effort.

French sharpshooter Clément Desmonts topped all scorers at the event with 34 points and was named MVP. The next two on the scoring list - Tanalp Sengün (Turkey) and Perrier - completed the Team of the Tournament.

Sengün - the 2015 U18 European Championships MVP - helped Turkey get past Andorra in a thrilling bronze-medal game (18-17).

Andorra - a principality of just 85,000 inhabitants - were the talk of the tournament as they knocked out contenders Slovenia and Hungary before finishing fourth.

The FIBA 3x3 U18 European Championships were staged in the heart of Debrecen, in front of the iconic Reformed Great Church.

They brought together the best 12 women’s and the best 12 men’s teams after two qualifying tournaments, which took place in Hungary and Latvia.

Final Standings of the 2016 FIBA 3x3 U18 European Championships: