France dominate on Day 4 at FIBA 3x3 U18 World Championships 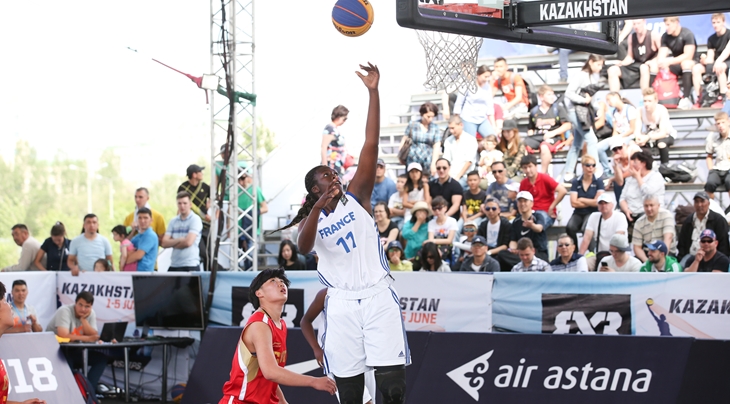 Team of the Day: France (women)

It was a walk in the park for France today as they won back-to-back against China (15-3) and the UAE (21-0). Captain Astou Daye continued to carry most of the load and jumped to 2nd in the scoring charts, 10pts behind Egypt's Nadine Selaawi.

The most spectacular game of the tournament so far with behind-the-back passes, monster blocks and two brutal poster dunks, courtesy of reigning champ and MVP Tai Wynyard.

Player of the Day: Tai Wynyard (13pts for New Zealand vs Hungary)

Even double teams could not stop the 2.05m big man against Hungary. The Auckland native now averages 11 points per game (in the first-to-21 format) and had a couple of nasty facials today.

Just a few minutes after Alberto Perez struck down a thunderous dunk, Astana was hit by a storm. For the safety of the players, the 8 remaining pool games were rescheduled to Sunday 5 June morning.

The number one 3x3 player in the world Veronika Kanyasi (Hungary) won gold in the skills contest of the 2016 FIBA 3x3 U18 World Championships.

She was the fastest of all participants in the qualifier on 1 June, then went on to defeat Nathaly Pinelo (Guatemala) in the semi-finals and Julia Niemojewska (Poland) in the final on 4 June.

Day 5: 9.30am-9.00pm on youtube.com/FIBA3x3 including the shoot-out final, the dunk contest final and the knock-out rounds of both men's and women's events. Go to FIBA.com/3x3U18 to learn more about the schedule.