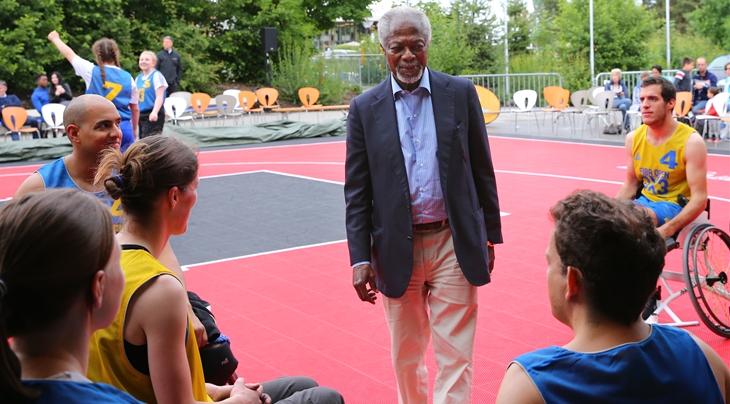 MIES - Participants at the second edition of the International Basketball Foundation (IBF)'s 3x3 Open were left stunned when former Secretary-General of the United Nations (UN), Kofi Annan, made a surprise visit.

Very much a grassroots event for the benefit of the community and centered strongly around the aims of having fun and socialising, it was fitting that such a globally recognised force for good like Annan dropped in - along with 1,800 other excited visitors.

His impromptu visit was met with relish by the wheelchair players lucky enough to meet with him, while Annan also enjoyed himself - showing his appreciation of the sport while chatting with IBF President Yvan Mainini and FIBA President Horacio Muratore.

An annual event which takes place the weekend closest to FIBA's birthday (18 June), the second edition of the FIBA Open staged on Saturday-Sunday 18-19 June was a roaring success - both in terms of numbers and quality. Around half of the 400 players taking part in this valuable IBF initiative were children, with some as young as just five years old.

There were also 30 nationalities represented, including opportunities for wheelchair players.

With nine courts and 100 teams, the 150 staff and volunteers once again worked hard to make it a memorable day for all concerned, while the event budget of CHF 70,000 (Swiss Francs) was fully financed by partners and sponsors.

"The FIBA Open is fully in line with the objectives of the Foundation," declared Mainini. "3x3 basketball is at the core of its activities and there is a strong social aspect supporting the initiative.

"This event is not only about high level basketball, it is more about being together, having fun and inspiring youngsters."