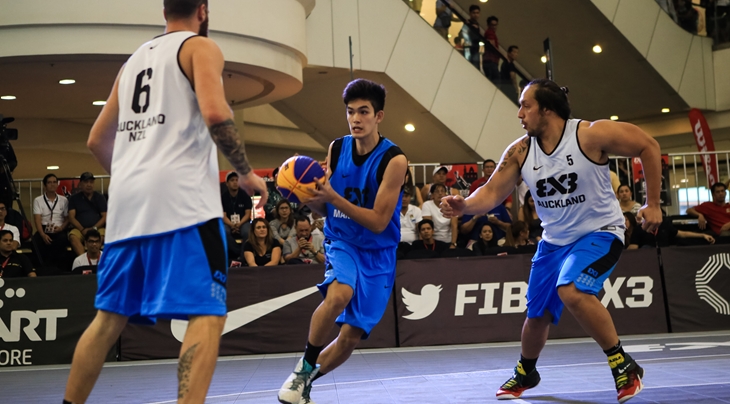 "People compare me to Kobe Paras. I don’t think we can be compared. He’s super athletic and I’m not. But it’s a great compliment obviously. I’ll do my best to build my own legacy."

I get the job done in a different way. - Sinclair

He may not fly like Paras but like him, he will lead the Philippines national team at the FIBA 3x3 U18 World Championships. Sinclair explains representing the country has a special meaning but he doesn’t expect a fairy tale story in Kazakhstan:

"It is a great feeling to represent the country. I saw the pool in Astana, with so many big teams: Spain, Brazil and New Zealand, the running champs. That’s a tough pool! Now I just hope we can make it to the next round."

Glad to be back in the Philippines! Time for me to prepare for the Fiba 3X3 u18 world championships! #LabanPilipinas

The son of an Australian dad and a Filipino mum was a late bloomer, starting basketball at 13 after seven years playing rugby. He played his first big 3x3 event last year, turning heads at the FIBA 3x3 World Tour Manila Masters.

"As a 17-year-old to be able to play against professional players… It was tough to lose obviously but it was really fun."

That’s every kid’s dream to play against Terrence Romeo! - Sinclair

"It was huge exposure for me, more than any of the tournaments I had ever played. A lot of people were watching and people started to pay attention and follow me. It definitely helped me get to college."

The wonderkid has just two weeks left to prepare for his first world event representing the Philippines. It will be the third time the country plays at the event and always fell just short of the Last 16 (18th in 2013, 17th last year).

"We will train 3-4 times a week for the next 2 weeks," tells Sinclair.

"Getting used to the ball and the pace of the game with a 3x3 expert.

"I love 3x3, that’s my favourite type of basketball. The space on the court and the fact there is no coach, it gives you so much freedom to show what you can do."

The FIBA 3x3 U18 World Championships start on 1 June and all games will be livestreamed on youtube.com/FIBA3x3