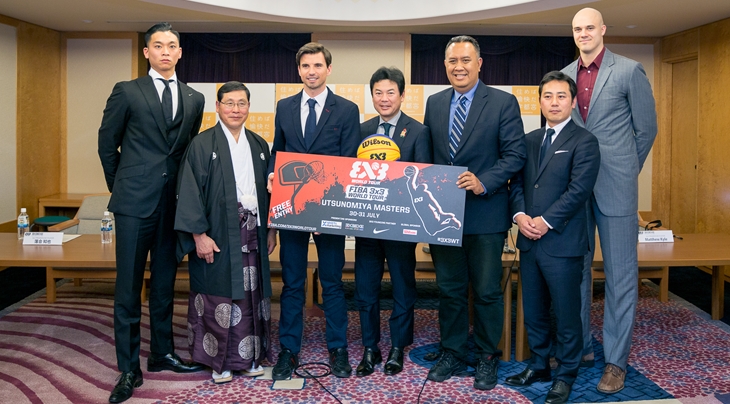 The event will be organised by X Sports Marketing in cooperation with the city of Utsunomiya in the heart of the city in front of the iconic Futaarayama shrine.

"We're very honoured to have this kind of international sports event in our city," Utsunomiya mayor Eiichi Sato told the media. "As we have very good support from FIBA and also from the Chief Priest of the shrine, we will make this event successful."

The number one 3x3 player in Japan, Tomoya Ochiai, explained at the press conference how much this event means to him.

I have experienced so many 3x3 international events in the past. These 3x3 experiences have changed my life. - Ochiai

"People in Utsunomiya love sports so much," the affable 28-year-old went on. "Especially basketball! For this reason I’m very excited to have a chance to play in this city."

"Plus 3x3 is open for everybody," insisted Ochiai, who is also known as 'Worm' in tribute to his idol, former NBA player Dennis Rodman. "Everyone can enjoy it, not only basketball fans!"

Ochiai is a member of an exclusive group of 12 players who have played in all four editions of the FIBA 3x3 World Tour.

The Utsunomiya Masters will mark the third time the main event of the FIBA 3x3 professional circuit stops in Japan after successful spells in Tokyo in 2013 and Sendai in 2014.

The rest of the 2016 FIBA 3x3 World Tour calendar will be announced in the coming weeks.